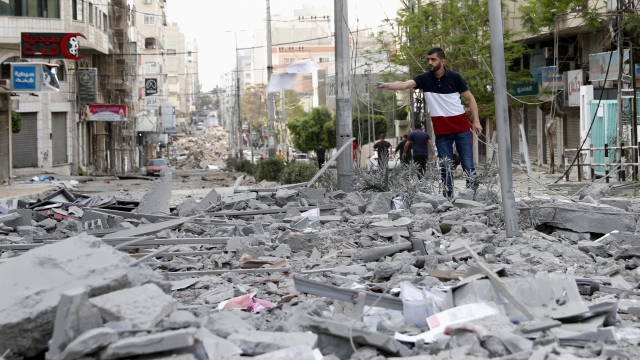 Monday marked the eighth day of air strikes and rocket barrages that have killed more than 200 people in Gaza and 10 people in Israel.

President Biden expressed support for a cease-fire between Israel and Hamas during a call with Israeli Prime Minister Benjamin Netanyahu.

Monday marked the eighth day of air strikes and rocket barrages that have killed more than 200 people in Gaza and 10 people in Israel.

On the call, President Biden stopped short of calling for an immediate cease-fire, but a readout of the call showed increased concern about ending the fighting – although he also expressed support for U.S. ally Israel.

The president "encouraged Israel to make every effort to ensure the protection of innocent civilians."

Meanwhile, Israel pressed on with attacks against Hamas. The country unleashed another heavy wave of airstrikes on the Gaza Strip Monday, saying it destroyed nine miles of militant tunnels and the homes of nine Hamas commanders.

International diplomatic efforts to end the fighting didn't seem to make much headway.

Prime Minister Benjamin Netanyahu said Israel would continue airstrikes "as long as necessary in order to return calm and security to all Israeli citizens."