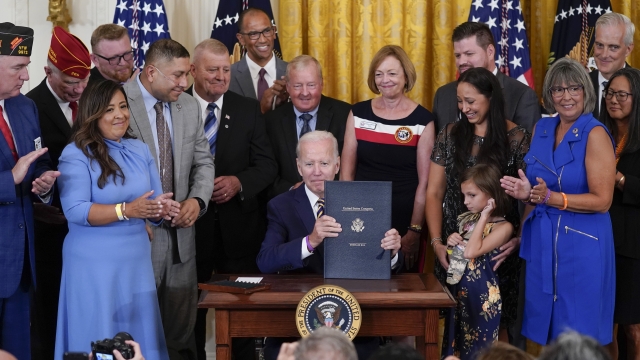 "It's a relief, but it's not a celebration certainly," said Jon Stewart, a PACT Act advocate.

President Joe Biden made it official at the White House Wednesday, putting his signature on the PACT Act during an emotional ceremony.

"You see that little guy you're sitting right next to? That's my grandson. His daddy lost to the same burn pits. And he knows what you're going through. But guess what? You're going to do this. You're going to be really, really strong," said President Biden.  "So many of you here today remind us that we have fought for this for so many years. Veterans. Surviving families. Surviving family members."

"I provide a little air cover now and again, but they would have gotten this done. This is a tenacious group," said Stewart.

In that group is Le Roy and Rosie Torres, who have experienced the horrific effects of these burn pits first hand.

Le Roy made a promise to his sergeant major in 2014, whose last words to Le Roy were "don't give up on this fight."

"When I see President Biden sign, and to hold back and just to finally acknowledge okay, Sergent Major, mission complete," he said.

And Sen. Jon Tester was one of the lawmakers on Capitol Hill who worked long to get this bill passed.

"By the way, if you're in a foxhole and you want someone with you, you want Tester in that hole with you," said Sen. Tester.

The White House calls the PACT Act the most significant expansion of VA healthcare in 30 years.

Before today, veterans had 5 years to enroll in VA healthcare after discharge.

The PACT Act also removes the Burden of Proof for veterans who are diagnosed with one of 23 specific conditions.

Before this, they were required to prove their illness was connected to their time in service.

But it wasn't an easy road to the president's desk.

The PACT Act faced uncertainty in the Senate when some GOP lawmakers voted against ending debate on the bill after voting in favor of it weeks earlier.

The second time's the charm though.

The PACT Act ultimately made it through the Senate on the second try last week.

Protesters including Rosie Torres mobilized, staking out in front of the Capitol in honor of those they'd already said goodbye to.

"This is all for them. I mean, we've seen a lot of funerals and been part of a lot of conversations and that's why we never gave up like they were what fueled our energy and our momentum," said Rosie Torres.

"It's gonna be growing pains right and that bill's gonna mature over the next several months and several years and all those VSOs now have to put people on guard duty. And watch this bill get one right. And good luck, because I've been doing it for the last 20 years with 9/11," said John Feal, a 9/11 first responder and veterans advocate.

"Their struggles aren't over. They still have cancer. They still have respiratory disease. They still have things. To come home and have to battle the very government you went overseas to fight and protect and defend is such an outrage and such a travesty for a country that purports to elevate service above all," said Stewart.

And Rosie and Le Roy Torres say they're not done fighting. Up next, they want to get a screening and prevention process in place like the World Trade Center Health Program.