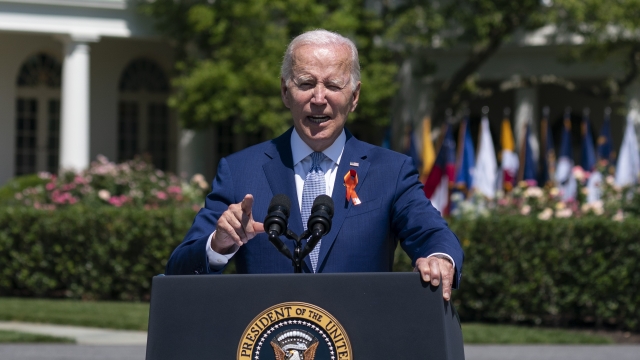 SMS
Is Biden's Strategy For Preventing Domestic Terrorism Working?
By Kellan Howell
By Kellan Howell
July 12, 2022
President Biden launched an ambitious four-pillar plan last year to deter and combat domestic terrorism. But what progress has been made one year in?

In the wake of the Jan. 6 insurrection at the U.S. Capitol and multiple acts of racially motivated violence, President Biden launched an ambitious national plan to combat domestic terrorism.

Now, more than a year since the program's launch, continued tragedies have many questioning whether any progress has been made.

Ryan Greer is the national security director at the Anti-Defamation League. He suggests some parts of the president's plan have been a success.

"If you look at the severity of that threat, I give the administration a B-minus," he said.

President Biden's strategy is made up of four pillars:

Considering the first two pillars, the Biden administration has made clear progress.

Administration officials say they've tripled the amount of domestic terrorism-related information shared between departments over the past 12 months.

The Department of Homeland Security has also launched a center for prevention programs and partnerships, known as CP3. It's a modest-sized grant program that helps reach individuals at risk of being radicalized.

Greer — who has worked in the Department of Homeland Security and the White House National Security Council — says the last two pillars of the president's plan have been more challenging.

The Justice Department has more than doubled its investigations into acts of domestic terrorism as of September of last year. But Greer cautions that the numbers aren't as impressive as they sound.

"I want to give them credit, and that's a big increase. But I would say it's barely keeping up with the threat," he said.

A Biden administration effort to create a federal disinformation board to combat misinformation was abandoned after facing harsh criticism from the public. And ultimately whatever progress is made by the administration could be undone if Congress doesn't act.

"A next administration who doesn't take it seriously could dismantle what little has been done," Greer said. "Or they could supercharge what's been done and look into their political enemies, as opposed to those who seek to commit violence."