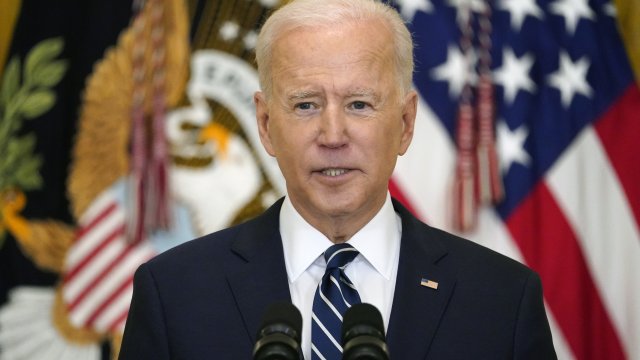 “Rolling back the policies of separating children from their mothers? I make no apology for that," President Biden said.

The southern border dominating President Biden’s first news conference as his  administration grapples with a surge of migrants and unaccompanied children. The president placed much of the blame on former President Trump despite changing policies via executive action.

"He, in fact, shut down the number of beds available; he did not fund HHS to get people to get the children out of those Border Patrol facilities," President Biden said. "So what we are doing now is attempting rebuild the system that can accommodate what is happening today."

The president insisted there are surges to start every year but admitted he's not happy with conditions at overcrowded Border Patrol facilities.

"That's why I've been working from the moment this happened to try to find additional access for children to be able to safely -- not just children, but particularly children -- to be able to be safely housed while we follow through on the rest of what's happening," President Biden said. "That is totally unacceptable."

President Biden touted progress in other areas, like COVID vaccinations, even doubling his goal.

"We will, by my 100th day in office, administer 200 million shots," President Biden said.

President Biden also pressured Congress on issues ranging from gun control to voting rights. He said he isn’t happy with the way the filibuster is currently being used, calling a 60-vote threshold to pass most bills in the Senate a relic of the Jim Crow era -- leaving the door open to reform a major procedural hurdle that threatens much of his agenda.

"In order to do that in a 50-50 Senate, we've got to get to a place so that I get 50 votes so that the vice president of the United States can break the tie or I get 51 votes without her," President Biden said.

The White House's next priority: Infrastructure like roads and bridges, and a massive recovery bill, which President Biden says he’ll unveil during a speech and planned trip to Pennsylvania.

"The next major initiative is to rebuild the infrastructure, both physical and technological infrastructure, of this country so that we can compete and create significant numbers of really good-paying jobs," President Biden said.

As for plans in the near future, the president says he "expects" to run for president again in 2024.

"My answer is yes: My plan is to run for reelection. That's my expectation," President Biden said.