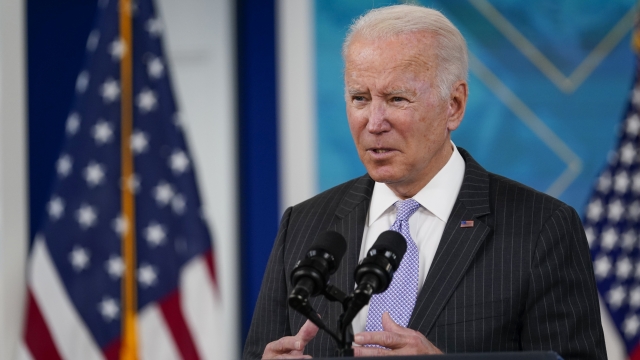 "I think the decision in Roe was correct because there's a right to privacy. There can be limitations on it, it cannot be denied," said President Biden.

In fact, in a 1974 interview, then-Senator Biden said "I don't like the Supreme Court decision on abortion. I think it went too far. I don't think that a woman has the sole right to say what should happen to her body."

It's been nearly 50 years since then, and for most of that time President Biden has been consistent in saying that he doesn't believe his personal views on abortion should be forced on others.

"I accept my church's position on abortion as a — what we call a de fide doctrine. Life begins at conception. That's the church's judgment and I accept it in my personal life. But I refuse to impose it on equally devout Christians, and Muslims and Jews. I just refuse to impose that on others," said then-Vice President Biden.

It was after leaving public office following the Obama administration that Biden's policy views on abortion began to shift. In June 2019, then-presidential candidate Joe Biden said he no longer supports the Hyde Amendment, which prohibits federal funds from being used for abortions.

"It became really clear to me that although the Hyde Amendment was designed to try to split the difference here and make sure women still had access. You can't have access if in fact everyone's covered by a federal policy. So that's why at the same time I announced that policy, I announced that I can no longer continue to abide by the Hyde Amendment," said then-candidate Biden.

The president has stuck to that decision since taking office. His first two federal budget proposals to Congress have left out the Hyde Amendment.

Democrats on Capitol Hill say President Biden has been a great partner in the fight for women's reproductive health rights.

"He actually advocated for the Women's Health protection Act which would enshrine Roe v. Wade into law. He advocated for eliminating both the Hyde and Helms amendments. Those are amendments that prohibited the use of federal funds so that poor women could have access to safe and legal abortions," said Rep. Lois Frankel of Florida.

But some abortion-rights activists are skeptical of how hard the president is willing to fight given his past views.

They want to see the president more forceful — giving speeches and even issuing executive orders in anticipation of the ruling.

At the same time, others recognize that faith makes abortion a tricky issue for many Democrats.

"What's important is that Joe Biden as president of the United States and leader of the Democratic Party, understands the fundamental freedoms and understands the difference between his personal view and what he would do in his personal life and what he and his party stand for in terms of protecting freedoms for the American people," said Mini Timmaraju, the President of NARAL Pro-Choice America.