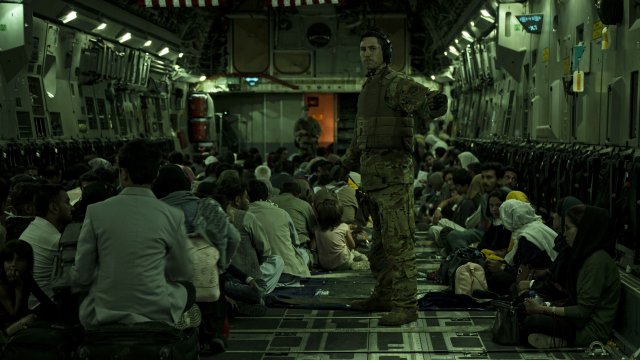 The U.S.-led evacuation of Americans and others from the chaotic Kabul airport is accelerating, with a one-day doubling of the number airlifted out of the country, although President Joe Biden is not ruling out extending the mission beyond the Aug. 31 deadline he set before the Taliban's swift takeover.

Over the 24 hours that ended early morning Monday, 28 U.S. military flights evacuated approximately 10,400 people from Kabul, according to a White House official. In addition, 61 coalition aircraft evacuated approximately 5,900 people. Combined, that is more than double the number airlifted in the previous 24-hour period — 3,900 aboard U.S. military aircraft and 3,900 aboard coalition planes.

In remarks at the White House on Sunday, one week after the Taliban completed their victory by capturing Kabul, President Biden defended his decision to end the war and insisted that getting all Americans out of the country would have been difficult in the best of circumstances. Critics have blasted Biden for a grave error in judgment by waiting too long to begin organizing an evacuation, which became captive to the fear and panic set off by the government's sudden collapse.

“The evacuation of thousands of people from Kabul is going to be hard and painful, no matter when it started, when we began,” President Biden said. “It would have been true if we'd started a month ago, or a month from now. There is no way to evacuate this many people without pain and loss of heartbreaking images you see on television.”

President Biden said military discussions are underway on potentially extending the airlift beyond his Aug. 31 deadline. “Our hope is we will not have to extend, but there are discussions,” he said, suggesting the possibility that the Taliban will be consulted.

Since Aug. 14, the U.S. has evacuated and facilitated the evacuation of approximately 37,000 people. Since the end of July, we have relocated approximately 42,000 people, the White House official said.

“We see no reason why this tempo will not be kept up,” President Biden said from the White House. The U.S. military says it has the capacity to fly 5,000 to more than 9,000 people out of Kabul per day.

President Biden asserted, without a full explanation, that U.S. forces have managed to improve access to the airport for Americans and others seeking to get on flights. He suggested that the perimeter had been extended, widening a “safe zone.”

“What I’m not going to do is talk about the tactical changes we’re making to make sure we maintain as much security as we can,” he said. “We have constantly, how can I say it, increased rational access to the airport, where more folk can get there more safely. It’s still a dangerous operation but I don’t want to go into the detail of how we’re doing that.”

Later, President Biden added, “We’ve discussed a lot with the Taliban. They’ve been cooperative in extending some of the perimeter.”

He said groups of Americans in Kabul are being moved more efficiently and safely to the airport, but he did not provide details.