President Biden To Meet With Saudi Arabia's King And Prince 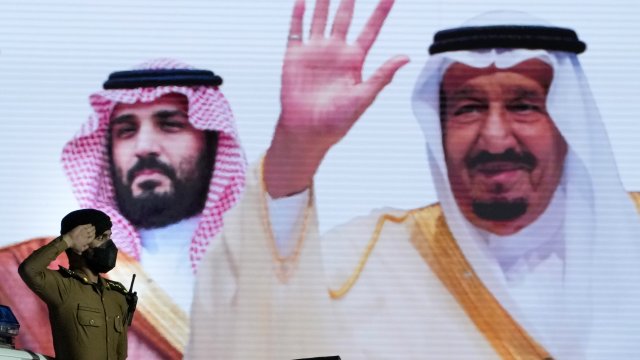 Will the meeting be about theatrics only or will it bring actual concessions from either side on oil, security or other issues?

It's the president’s first trip to the Middle East since taking office, and he’s capping it with a controversial move: a visit to Saudi Arabia.

As a candidate, President Biden called the kingdom a pariah state.

So why the about-face?

"It seems to be driven by a couple of factors," said Trita Parsi, executive vice president of the Quincy Institute for Responsible Statecraft. "Oil is obviously one of them, but a bigger one seems to be that right now, Biden is very worried that Saudi Arabia, the UAE, will start orienting themselves more towards China and Russia.”

The war in Ukraine and record prices at the pump are pushing the president to soften his stance on the oil-rich kingdom and its de facto ruler: Crown Price Mohammed bin Salman, or MBS.

The two leaders are slated to meet on Friday, but it’s unclear if they’ll have a one-on-one chat or if they’ll even shake hands.

President Biden had previously refused to engage with the prince after U.S. Intelligence concluded he orchestrated the murder of Washington Post columnist Jamal Khashoggi — something the 36-year-old Saudi prince denies.

Prince bin Salman is all but ensured to soon succeed his 86-year-old father King Salman, who is in poor health. To get there, the prince has been ruthless.

"He consolidated his power a couple of years ago by imprisoning almost all of his cousins and taking power away from them," Parsi said.

Bin Salman is moving to modernize Saudi Arabia by getting rid of the religious police, allowing women to drive and legalizing cinemas and concerts. But experts say he’s doing so as the vindictive tyrant of an increasingly repressive country.

“It is true he allowed women to drive cars, but he also then imprisoned all of the leaders of the women’s movement who had pushed for women to be able to drive cars," said Parsi. "He did not want to give them credit.”

"In a certain sense, this is following the Chinese model," said Gerald Feierstein, director of Arabian Peninsula affairs at the Middle East Institute. "The Chinese model being economic liberalization, social opening, and yet absolutely no suggestion that the political system is going to be more open or more democratic."

“I have been surveilled, being threatened, intimidated," said Alaoudh, research director for Saudi Arabia at Democracy for the Arab World Now. "My cousin, my uncle, my father have been arrested for years. 19 members of my family are banned from travel and just because they are relatives.”

As president, Donald Trump made his first overseas trip to Saudi Arabia.

But when President Biden took office, he promised to change course. He quickly declassified the intelligence report on Khashoggi’s killing and imposed sanctions on Saudis involved, but not on the prince himself. The White House decided it couldn't afford a full break up with such a strategic ally.

Defending his decision to now travel to Saudi Arabia, President Biden writes in a Washington Post op-ed that from the start his aim was “to reorient — but not rupture — relations with a country that’s been a strategic partner for 80 years.”

But ultimately the question is: Will the meeting be about theatrics only or will it bring actual concessions from either side on oil, security or other issues?