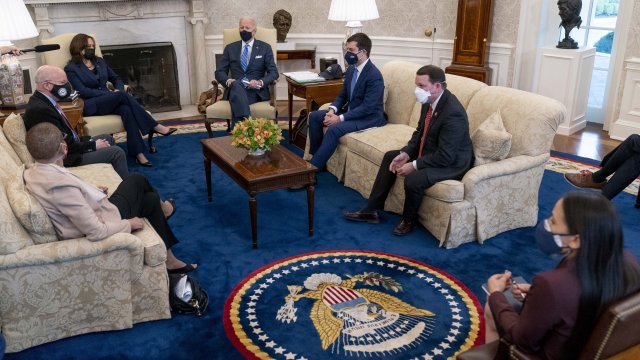 The president is discussing the infrastructure bill with Republicans again this week ahead of a House vote Wednesday.

The clock is ticking on President Biden's trillion-dollar infrastructure bill, with the commander in chief discussing potential deals with Republicans for a *third* time this week after rejecting the GOP's latest bill offer on Friday.

Democrats plan to start preparing the bill for a vote Wednesday, apparently with or without Republican support.

"It is frustrating that there's not more coming together on this, but as the president's red line is, as you have heard, is that inaction is his red line," Granholm said. "So there will be action. We're just hopeful that we can see it in a bipartisan way. That would be good for the country."

Both sides are still at odds on how to pay for the bill. And while Democrats have been pushing for what they call human infrastructure, like investments in long-term care, Republicans' main focus is on physical infrastructure like roads and bridges.

And according to Transportation Secretary Pete Buttigieg, the counter-bills aren't meeting the president's objectives. He told CBS on Sunday the bill needs more funding in order to make a "generational investment."

“This is not just about getting through this season or some kind of short-term stimulus," Transportation Secretary Pete Buttigieg said. "It is about making sure that America wins its future at a time when our competitors, like China, and our allies are investing much more frankly in infrastructure than we are."

The Democrats' infrastructure bill will need the votes of the entire caucus and 10 Republicans to pass, or it could be pushed through without GOP support through a reconciliation process.

Democratic Sen. Joe Manchin, the most conservative of his caucus, says the latter is a bad idea. He's consistently pushed for bipartisan support of bills through the Senate, also saying Sunday he would vote against a sweeping voting rights bill the president is trying to push through the filibuster.

Manchin has recently been trying to refocus the bill on physical infrastructure and bring down the cost. And since he won't agree to go at the bill alone with Democrats, the bill may depend on those 10 Republicans to get through.

"There's been seven brave Republicans that have spoken out. They have voted, whether it be impeachment or the wrongdoings of the president, whether it be for a commission. We have to continue to keep striving to make sure that we can get to that 10. And that's why we're called the deliberate body. We keep working towards that goal."