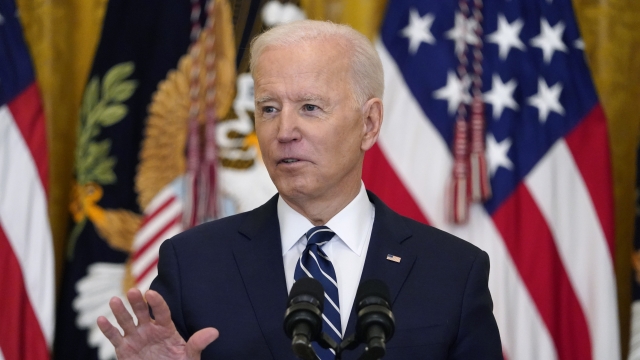 He increased his COVID vaccination goal to 200 million shots in his first 100 days in office and promised more media access at the U.S.-Mexico border.

President Biden fielded questions on a range of domestic and foreign policy issues during his first formal news conference today.

He said he expects to run for re-election in 2024 and that his next major initiative will be infrastructure.

The president also upped his pledge on COVID vaccinations.

"We will by my 100th day in office have administered 200 million shots in peoples arms," he said. "That's right, 200 million shots in 100 days. I know it's ambitious, twice our original goal, but no other country in the world has even come close, not even close to what we are doing. I believe we can do it."

The U.S. is already on pace to hit that goal with an average of about 2.5 million doses administered per day.

Much of the Q&A today focused on the surge of migration at the southern border.

The president promised transparency with the border detention facilities but didn't give us a date for greater media access, which has been very limited to this point.

He also said the majority of families are being sent back, but, according to government data obtained by Axios, that's not the case. Just 13 percent were expelled last week.

The president also says this surge is something that happens every year.