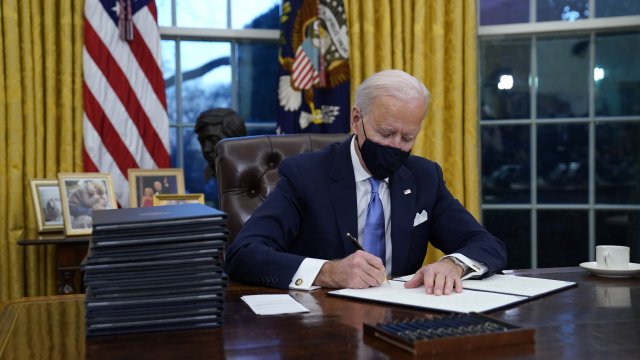 The president has rolled back the Trump administration's signature restrictions affecting 13 countries, most of them predominantly Muslim.

Hours after taking office, President Joe Biden repealed travel and immigration restrictions for citizens of 13 primarily Muslim and African countries, undoing a signature Trump administration policy and kicking off his promise to "restore humanity to our immigration system."

Families long separated — partly because of the so-called travel ban — cheered the news, though they questioned how quickly it would help them reunite with loved ones.

She hasn't seen her husband in nearly six years and has raised her two kids alone in the U.S.

Alamdari won the diversity visa lottery for her family in 2014, though she says her husband was left out because of an error in the system.

She decided to move the family to the U.S. without her husband and applied to sponsor him as soon as she landed in 2015.

"They told me that you are lucky, you are Iranian and this will take just one year for you. But I was not lucky." Alamdari said.

Half a decade later, her husband's application is still in limbo. It was delayed by President Trump's 2017 restrictions on citizens of Iran and other countries he deemed security threats.

Alamdari is relieved by President Biden's repeal. But she and immigrant advocates say the executive order alone won't be enough.

"We really need to see a concerted effort from the Biden administration to help the immigrants that have been affected by the Mulsim ban receive their visas," said Rafael Urena, an immigration lawyer who represents Alamdari.

As for immigration hardliners, they say repealing the travel bans removes incentives for countries like Syria, Libya and Nigeria to improve their own security vetting of travelers to the U.S.

"I wouldn't necessarily simply trash them on day one, because if they are exploited, it's going to be tragic for the American people," said Andrew Arthur, a policy analyst for the Center for Immigration Studies, a group that advocates for lower levels of immigration.

The Biden administration says it will work on "enhancing information sharing with foreign governments" and will "develop a proposal to … remedy the harms caused by the bans" on people like Alamdari.