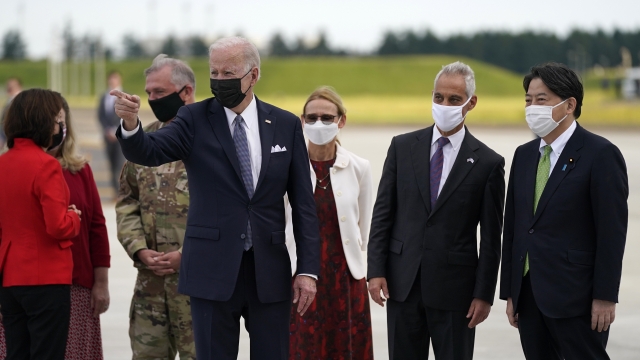 A central theme for the trip is to tighten U.S. alliances in the Pacific to counter China’s influence in the region.

During the Japan leg of U.S. President Biden’s trip, he will meet with Prime Minister Fumio Kishida on Monday and lay out his vision for negotiating a new trade agreement, the Indo-Pacific Economic Framework.

Soon after arriving in Tokyo on Sunday evening, President Biden stopped by the U.S. chief of mission’s residence to take part in a room dedication for Norman Mineta, the late U.S. transportation secretary.

Mineta, a former Democratic congressman who served in the Cabinets of both George W. Bush and Bill Clinton, died earlier this month. He was the son of Japanese immigrants, and he and his family were among those held by the U.S. government in Japanese interment camps during World War II.

A central theme for the trip is to tighten U.S. alliances in the Pacific to counter China’s influence in the region.

But within the administration, there’s an ongoing debate about whether to lift some of the $360 billion in Trump-era tariffs on China. U.S. Treasury Secretary Janet Yellen recently said some of the tariffs are doing more harm to U.S. businesses and consumers than they are to China.

On Tuesday, Japan hosts President Biden at a summit for the Quad, a four-country strategic alliance that also includes Australia and India. The U.S. president will then return to Washington.