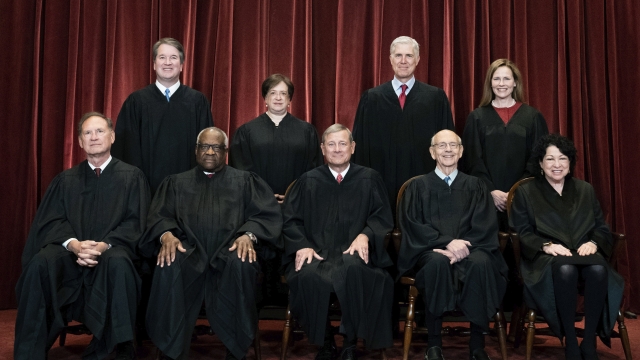 The president has pledged to fill the seat with a historic naming of the court's first Black woman.

It's an announcement set to have a ripple effect down Pennsylvania Avenue, for decades to come.

"This is sort of a bittersweet day for me," President Biden said. "Choosing someone to sit on the Supreme Court, I believe, is one of the most serious constitutional responsibilities a president has. Our process is going to be rigorous."

It's a promise Democrats have been waiting to see kept since the 2020 campaign trail.

"That person will be the first Black woman ever nominated to the United States Supreme Court," the president continued. "It's long overdue in my view."

The announcement comes less than a day after reports that Justice Stephen Breyer, the senior-most liberal on the court, planned on retiring after nearly 28 years on the bench.

President Biden all but guarantees the future of the court will be female. After Justice Breyer steps down, the three liberal justices on the bench are primed to be minority women.

Some candidates on the short list include federal judge Ketanji Brown Jackson, who clerked for Justice Breyer; Leondra Kruger, who's been a justice on the California Supreme Court since 2015; And J. Michelle Childs, a federal district judge from South Carolina.

Justice Breyer plans to step down during the court's summer recess, which could be anytime from late June to early July.

"In the Senate, we want to be deliberate. We want to move quickly. We want to get this done as soon as possible," Senate Majority Leader Chuck Schumer said.

The president now has a chance to fill a seat in the conservative-majority court and avoid the appointment of a right-leaning justice, should a Republican be elected in 2024 and something happen to a liberal justice on the bench.

That nominee's set to be named by the end of February. But whoever the president settles on, the appointment process will likely be smooth sailing. The Democrat-controlled Senate only needs a simple majority  to confirm the nominee.

Meanwhile, Justice Breyer — a known critic of politics elbowing its way into the high court — says he's optimistic whatever the outcome.

"This is a complicated country. More than 330 million people. My mother used to say it's every race, every religion and she'd emphasize this and it's every point of view possible," Breyer said. "It's an experiment that's still going on."

Isbella Diaz is a segment producer for Newsy's evening content. Before joining the Newsy team, she was a TV & online producer for CGTN America. She also worked for the journalism nonprofit, the National Press Foundation, and Washington's leading news and talk radio station, WMAL. Isbella has a Master's in International Media, and a Bachelor's in Broadcast Journalism from American University in Washington, D.C. When she's not catching up with the news online via BBC, AP, or Reuters (and of course, Newsy!), she spends her time scoping out new coffee shops and trying different restaurants in the city. @isbelladiaz