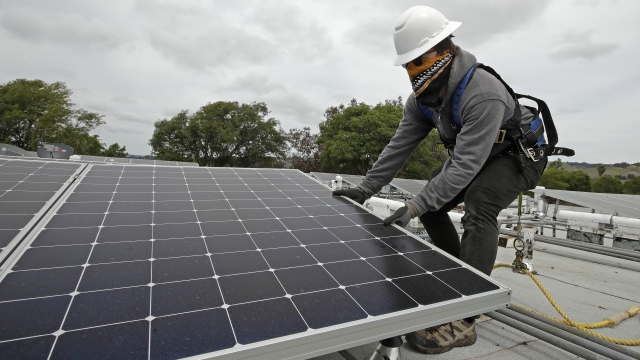 The Biden administration says jobs will fix the climate crisis.

"Our plans are ambitious, but we are America," President Biden said. "We're bold."

President Biden says his plan will require retraining thousands of people to retrofit housing, build solar panels, wind turbines and more. His goal: 10 million clean energy jobs. Many of the workers filling those jobs would come from the hundreds of thousands who currently work in the fossil fuel industry.

The president has proposed a $2 trillion climate plan over the next four years, but it's probably only the tip of the iceberg.

"The Biden plan is just a down payment on a conversion to clean energy products," Scott said. "It's going to take about 30 years by the best estimates I've seen. It gets spending ramped up, but we're going to have to increase it further and sustain it over that 30 year period in order to get the conventional energy supplies out of our economy."

Right now, the United States depends on fossil fuels for about 80 percent of its energy.

"We have to do something about it and that it is literally a threat to human life."

Sen. Bob Casey, a Democrat, supports Republican initiatives to continue fracking — a major industry in his home state of Pennsylvania.

Newsy asked: "Do you think it will be possible for people to transition from working in fossil fuel to renewable energy?"

"It's going to require a determined effort to provide people the opportunity and the training," Casey told Newsy.

"Everybody understands we need to reduce our carbon footprint on the planet."

Congressman Kelly Armstrong’s family has devoted their entire livelihood into the oil and gas industry.

"The reality is, is these jobs don't exist," Armstrong said. "We need energy. We have to have it. And to say that we can do it all with solar and wind under current technologies is just simply not true."

Meanwhile, the demand for solar power has been on the rise.

"I know a lot of those guys that were on the pipelines and they are hard, hard workers and that's exactly what we need in this industry," Ches Heitmeyer, owner of Solar Sam in Columbia, Missouri, said.

The bottom line, America needs to invest before it can run on just renewable energy.

"We're not going to eliminate the oil and gas industry, for example, overnight," Scott said. "Those jobs will still be there. We will still need these fuels in the transition."