Is The Preservation Of Japanese-American Internment Sites In Peril? 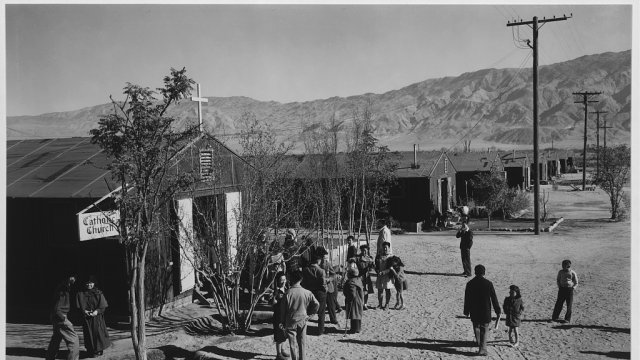 SMS
Is The Preservation Of Japanese-American Internment Sites In Peril?
By Cat Sandoval
By Cat Sandoval
March 16, 2018
In 2006, Congress enacted the preservation of historic confinement sites, but the current 2019 budget does not have funding for it.
SHOW TRANSCRIPT

That cringeworthy exchange between Interior Secretary Ryan Zinke and Rep. Colleen Hanabusa happened Thursday, with some immediately calling the remark "racist," "flippant" and "juvenile." After Rep. Hanabusa, a fourth-generation Japanese-American, shared that her grandfathers were forced into internment camps during World War II, Zinke replied "konnichiwa," which roughly means "good afternoon" in Japanese.

There were strong reactions to Zinke's comments, but beyond that, some experts argue it's indicative of the lack of knowledge about Japanese-American history. Hanabusa's point was to highlight a grant that helps preserve Japanese-American confinement sites — and how that funding isn't included in the administration's 2019 budget. The program is currently seeking about $3 million for next year.

In 2006, Congress enacted the preservation of historic confinement sites, authorizing a total of $36 million spread out over the life of the grant program, to be approved by Congress each year.

David Inoue, the executive director of the Japanese American Citizens League, said, "$3 million is not a lot of money in the grand scheme of our federal budget, but when you talk about giving $50,000 for a quality education program, it really opens up the learning base for who is going to learn about what happened during World War II." 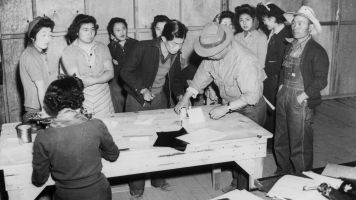 75 Years Ago: An Executive Order Sent 120,000 Japanese Into Internment

Seventy-six years ago, about 120,000 mostly Japanese-Americans were forced into internment camps after the the Japanese bombing of Pearl Harbor. The internment was so horrific that it warranted a public apology from President Ronald Reagan in 1988. He said: "This action was taken without trial, without jury. It was based solely on race, for these 120,000 were Americans of Japanese descent."

But according to Inoue, some of that history could be lost without appropriate funding. "Unfortunately, we are still seeing that a lot of people still do not know about the Japanese-American experience during World War II and that American citizens were essentially deprived of their rights as citizens. And we feel it is vitally important that programs like this are available to ensure that those stories do continue to be told," Inoue said.

As for Zinke's comments, Inoue says: "I think it was a perfect encapsulation of why this funding is so important, that it perfectly demonstrated the latent racism that does exist in this country. That someone who is a fourth-generation American can still be seen as a foreigner, and that's the same racism that led to the incarceration of Japanese-Americans."