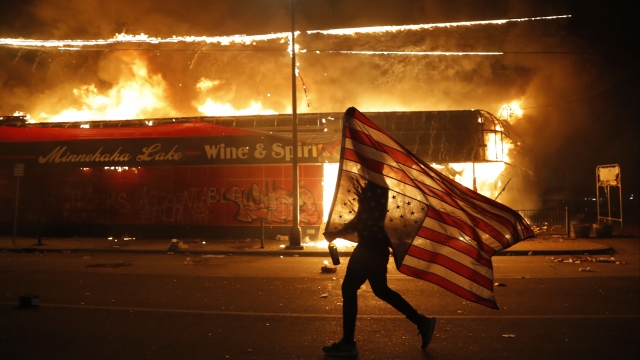 President Trump is calling on the Supreme Court to reverse a decision that protects burning the American flag as a form of free speech.

During a call with governors Monday, the president called burning the American flag a "disgrace" and supported passing laws that would make it illegal.

"We have a different court and I think that it's time that we review that again ... I think it's time to relook at that issue, hopefully the Supreme Court will accept that."

He told the governors: "If you wanted to try to pass a very powerful flag burning statute again -- anti-flag burning, I hope you'll do it because we'll back you 100% all the way. Okay? I hope some of you do it."

President Trump's calls comes as cities across the country are experiencing civil unrest following the death of George Floyd. Many protests have included the burning of American flags.

In 1989, the Supreme Court ruled 5-4 that burning the American flag was a form of free speech and therefore protected under the First Amendment. The case stemmed from a demonstration in Dallas during the 1984 Republican Convention.

He later told CNN in 2012: "If I were king, I would not allow people to go around burning the American flag. However, we have a First Amendment, which says that the right of free speech shall not be abridged -- and it is addressed in particular to speech critical of the government."

Senate Majority Leader Mitch McConnell has also supported the right to burn the flag, saying in a 2006 opinion piece the "flag stands for freedom, even to desecrate."

McConnell reiterated his support for the form of protest in 2016 — when then President-elect Trump suggested citizens who burned the flag should face a "loss of citizenship or year in jail!"

A Supreme Court challenge may not turn out the way the president wants it to. The New York Times notes that Chief Justice John Roberts Jr. and Associate Justice Brett Kavanaugh have indicated that they agree with the Supreme Court’s 1989 decision.