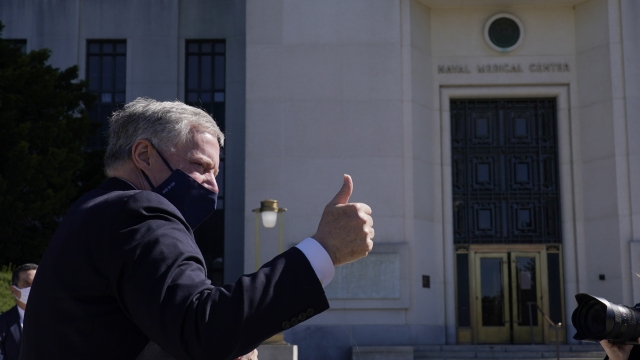 "We're gonna beat this coronavirus – or whatever you want to call it – and we're going to beat it soundly," President Trump said in a taped video.

The president said late Saturday night he is recovering well from COVID-19 following a day of conflicting reports on the state of his health.

In a video posted to his Twitter account, the president said he is feeling much better and thinks he can return to the campaign trail soon.

"I came here and wasn't feeling so well. I feel much better now. We're working hard to get me all the way back. I have to be back because we still have to make America Great Again...We're gonna beat this coronavirus – or whatever you want to call it – and we're going to beat it soundly."

The president is expected to stay at Walter Reed Medical for at least the next few days.

At a press conference at Walter Reed earlier Saturday, the president's physician, Dr. Sean Conley painted a  rosy picture, telling reporters he was "cautiously optimistic" about the president's "improving" condition.

Attention has turned to where the infection was transferred to President Trump. Many have zeroed in on the president's Sept. 26th Supreme Court nomination ceremony in the Rose Garden — where over a hundred people gathered and embraced each other, the majority of them not wearing masks.

An ABC-Ipsos poll out Sunday finds that nearly 3 in 4 Americans, or 72%, believe the president did not take the "risk of contracting the virus seriously enough," nor "the appropriate precautions when it came to his personal health."