Pres. Trump Says Coronavirus Deaths Will Be Less Than Forecast 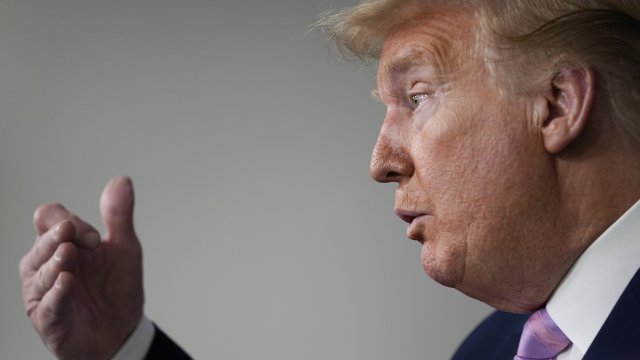 President Trump said during a press conference Friday the death toll from coronavirus may be 'substantially under' previous projections. But his top medical adviser says precautions should remain in place.

"The minimum number was 100-thousand lives and I think we'll be substantially under that number. Hard to believe that if you had 60-thousand, you can never be happy — but that's a lot fewer than originally told and thinking," President Trump said.

Last week, the president said the U.S. could see as many as 100,000 to 220,000 deaths. However, he said that number may not be reached as cases in hard hit areas like New York, Detroit and New Orleans are falling and the national peak is projected to occur sometime this weekend. The U.S. currently has over 500,000 cases and roughly 20,000 deaths, according to Johns Hopkins University.

While Trump said the U.S. can begin considering reopening hospitals to perform elective surgeries, disease expert Dr. Anthony Fauci said the country isn't ready to reopen fully, and cases will still continue to occur after it does.

"Don't let anyone get any false ideas that when we decide at a proper time when we're going to be relaxing some of the restrictions, there’s no doubt you're going to see cases, I would be so surprised if we did not see cases. The question is how you respond to them"

He added many areas in the middle of the country are still bracing for their peak in infections. Some tracking models for the virus say cases may spike in Florida and Texas.