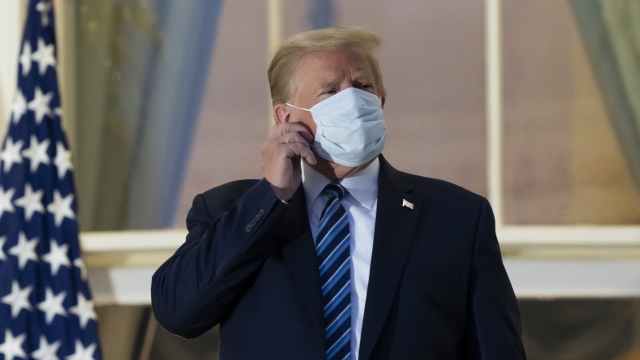 President Donald Trump is the ultimate VIP. And experts Newsy spoke with say parts of his COVID treatment plan differ from a hospitalized U.S. patient with similar symptoms.

"The treatment the president is going to get is different than the treatment you or I would get," Dr. Calvin Sun, an ER Doctor and assistant clinical professor at Mount Sinai, said.

"The fact that he's not getting hydroxychloroquine suggests the doctors are holding their own and holding firm and most of what he's getting makes a lot of sense," Dr. Steven Shapiro, the chief medical and scientific officer at the University of Pittsburgh Medical Center, said. "But there is always the risk of overtreatment with the ultimate VIP."

Research shows celebrities, politicians, even doctors and nurses may get specialized treatment, leading to more tests and interventions like surgery or medications, sometimes unneeded.  Doctors may also shy away from asking VIP patients the really "tough" questions.

Lets break it down by treatment the president received. First, dexamethasone-the steroid has been around since the 50’s, and is available in most ER’s and hospitals across the country. But doctors have used it traditionally for coronavirus patients with cases more severe than what we’ve been told about President Trump.

"For us, if you've had symptoms at least seven days and you're requiring supplemental oxygen, we will give you dexamethasone," Dr. Khalilah Gates said.

Gates is a pulmonary and critical care specialist at Northwestern Memorial Hospital in Chicago. At her hospital, a patient’s need for oxygen is what determines if they get the drug.

The same stands true for Remdesivir. At Northwestern, a patient’s need for oxygen is what determines if they get the drug. But many hospitals are reserving the treatment for only the sickest patients.

The HHS just stopped allocating the 3 thousand dollar plus anti-viral on October 1st, saying that the current supply exceeds demand.

"There is an allotment of remdesivir," Gates said. "So there's a little bit of play there."

You won’t get the "antibody cocktail" President Trump was given if you’re hospitalized for COVID-19. It’s experimental, and not approved. Under an FDA program called compassionate use, a doctor requests permission for just one patient, and the FDA says they must determine several things including if the patient has a serious or life threatening condition and if giving it compromises research.

"This compassionate system is not a system that's intended for widespread distribution," George Yancopoulous, the co-founder of Regeneron Pharmaceuticals, said. "I have a feeling we're probably going to now be maybe inundated with people wanting to get it. And it's just not possible."

And lastly, aftercare. The president’s doctors say they plan to monitor him constantly and will give him his last IV treatment of remdesivir Tuesday night at the White House, which has a medical facility equipped to do so.

The care for COVID-19 patients coming home varies case by case, but for the thousands of Americans who recovered after the hospital, it looks more like this... resting and slowly gaining strength back.