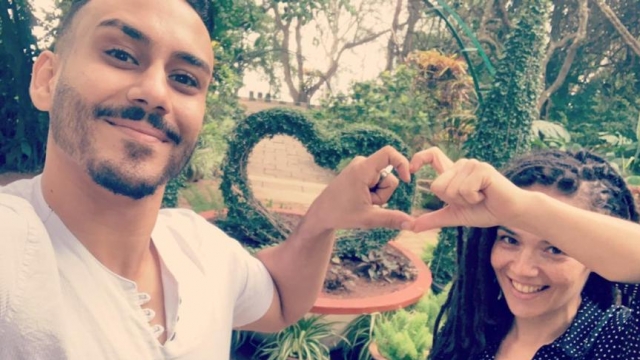 SMS
Pres. Trump's Pandemic Bans on Travel, Visa Hurting Binational Couples
By Ben Schamisso
By Ben Schamisso
January 4, 2021
Many international couples have been separated for months as a result of the president's ban on certain travel and immigration during the pandemic.
SHOW TRANSCRIPT

Courtney Watkins has been separated from his Senegalese fiancé for 16 months.

"It really plays with your mind and not just your heart, but your mind," Watkins said.

The binational couple met in China in 2017 where they both lived at the time. They instantly fell in love, got engaged and moved in together.

"We became a couple on Christmas so Christmas is our anniversary date," Watkins said.

After a while, they decided they wanted a future together in the U.S.

So in mid-2019, Watkins flew back home to Los Angeles. But his partner stayed in China to apply for a fiancé visa at the local U.S. consulate.

"It was a terrible crying, soppy goodbye, but we were thinking six months," Watkins said.

A year and a half later, they are still living at opposite ends of the world — their applications delayed by Trump administration policies curbing immigration during the pandemic.

But the situation has been particularly tough for those hoping to settle in the U.S.

"You ask yourself how wanted and accepted you really are in the country where you live," said German immigrant Rabea Kruegel, who's been living in the U.S. for nearly a decade and is a permanent resident.

"I do my part here. I pay my taxes and whatnot," Kruegel said.

She met her Iraqi husband while she was on vacation in India and has been trying to bring him to the U.S. ever since they got married in Baghdad 15 months ago.

"We met in Goa and pretty much inseparable since then," she said.

Their immigration petition has been in limbo ever since President Trump issued a ban on most visas to, as he puts it, "protect American workers" during the pandemic.

But not everything is lost for Kruegel, Watkins and their partners stranded overseas.

Both couples hope they can soon reunite in the U.S. thanks to recent legal victories related to their immigration cases — and thanks to the prospect of a new administration.