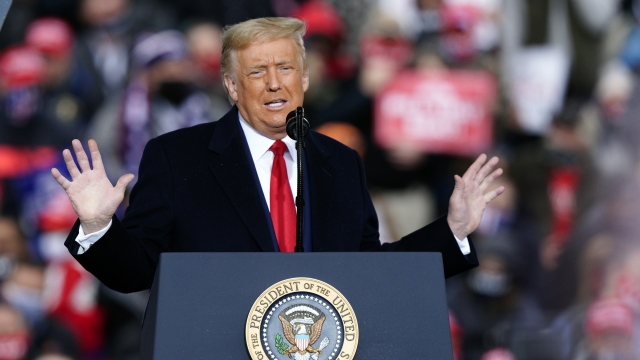 With about one week to go before Election Day, the president is making a final pitch to voters that will largely focus on the economic recovery and what's to come in a second term.

"The closing argument is about what next year is going to look like. This president is committed to getting the vaccine before the end of this year to begin a return to normal living next year and have record-setting prosperity," said Trump campaign adviser Stephen Miller.

Miller says the Trump campaign is aiming to contrast with the Biden campaign with a robust travel schedule that will take the president to states like Pennsylvania, Wisconsin, Nebraska and Arizona. Trump family members including First Lady Melania Trump are also hitting the trail.

The intense campaign schedule comes during recent coronavirus spikes across the country and after several members of Vice President Pence's staff tested positive for the virus. The vice president has so far tested negative and hasn't changed his travel schedule.

Trump campaign officials point to their robust ground game operation as the key to winning the election, but recent polls show challenger Joe Biden in the lead nationally — albeit with tighter races in key battleground states. Team Trump has also been outraised and outspent by the Biden campaign in recent months.

Still, Miller says a contrasting image between the campaigns, along with key priorities for a second term, will win over voters in the final stretch. Some of those policy goals include bringing back jobs, protecting law enforcement officers, producing medical supplies in the U.S. and immigration reform.

"So one of the big promises in a second term is going to be establishing a merit-based immigration system that's something that they have in Canada, that's something they have in Australia. In the 21st century, it's about selecting people to come into our country who are going to be able to contribute to the economy, not be reliant on welfare and certainly not take job ups from struggling Americans," Miller said.

But most strategy aides say the campaign is banking on voters believing better days are around the corner.

"Our agenda is one of unlimited optimism, opportunity,  growth, patriotism, prosperity and true American pride that's what we have," said President Trump.