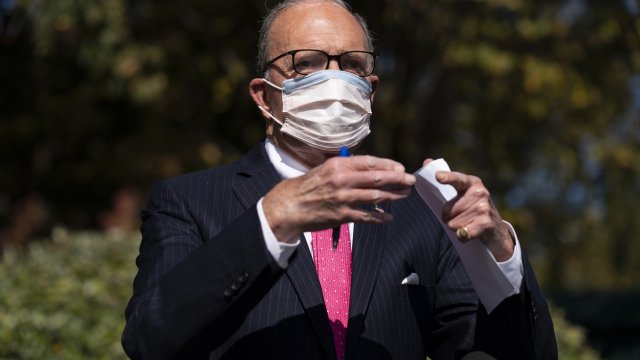 White House official says another relief bill is still on the table, though chances are seen as slim amid pushback from Pelosi, GOP-led Senate.

The White House's economic adviser says the possibility of another coronavirus relief bill is still on the table...though there is considerable skepticism from other political players.

President Trump has sent mixed signals on the stimulus, saying last week he was cutting off talks with Speaker Nancy Pelosi until after the election.

Then, he reversed course and is back in negotiations. Treasury Secretary Steven Mnuchin countered Pelosi's $2.2 trillion proposal with one price tagged at $1.8 trillion.

And even though Senate Republicans pushed against it over cost, President Trump said he'd even ask for more money than either side for specific areas.

Adviser Larry Kudlow told CNN's "State of the Union" a deal between the two sides is narrowing, but he blamed Democrats for not coming to an agreement sooner on targeted measures like unemployment assistance and another round of Paycheck Protection loans for businesses.

"They have bipartisan support," Kudlow said. "We could do it as standalone bills or an omnibus bill or whatever. But I do not understand the intransigence from my Democratic friends."

But Pelosi says Democrats won't agree to targeted bills unless they're paired with a broader package for the public, including money for ailing state and local governments. She said the sides had been working towards an agreement before the president abruptly announced a death knell to the negotiations.

"When the President did his strange tweet that said we're walking away from negotiations, it was like 'what?' We've all been working very hard to find our common ground, to agree on language, so that we have an understanding of what the legislation will do," Pelosi said.

Senate Majority Leader Mitch McConnell says a deal is unlikely to pass before the November 3 election. Meanwhile, unemployment claims remain high and tens of thousands of employees at airlines and other major U.S. companies have been furloughed or laid off.