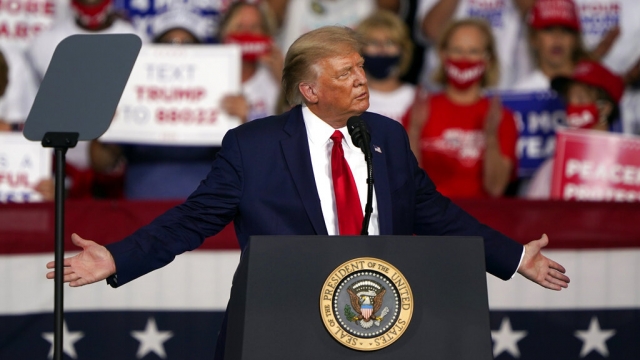 SMS
President Trump Pitches Suburbia. Is it working?
By Amber Strong
By Amber Strong
September 10, 2020
Experts say a "Leave it to Beaver" type view of the suburbs is outdated as these areas have become more racially and economically diverse.
SHOW TRANSCRIPT

“Suburbia will be no longer,” President Trump told a Florida crowd.

One message after another, the president is targeting so-called suburban housewives who “will be voting for him” because they “want safety” and fear an “invasion” of “low income housing.”

“I think he needs to maybe get in touch with suburban women before he speaks for us,” said Maya Guy, creator of Suburban Women for Kamala Harris.

Guy says she’s voiced her opinion on politics before ...but nothing like this. In less than a month, the group boasts 187,000 followers.

“There's a lot of Republican women in the group who were saying, 'I'm voting Democrat for the first time because I'm fed up.' Right?” stated Guy.

A recent poll from NPR and PBS shows 66% of suburban women disapprove of how the president is handling his job.

And polling from Fox News shows suburban women in three battleground states prefer Joe Biden to President Trump when it comes to policing and criminal justice.

President Trump narrowly won the overall suburban vote in 2016, helped in part by White female voters. Though the president now downplays recent polls, there’s no denying his focus on crime, housing and the suburbs is a direct effort to reach that key voting bloc.

“We ended a rule that was a very horrible rule for people in suburbia,” the president told reporters in July.

It required localities that received federal funding to identify and report any potential segregation and discrimination in housing. President Trump said the rule would lead to the destruction of the suburbs.

Homing in on housing is tricky because suburban women are diverse economically and ethnically, so it’s hard to pin down the issues that are of importance to them.

“The majority of every major racial and ethnic group lives in the suburbs within our major metro areas. Most poor people live in the suburbs, more people living in poverty, live in a suburban community than they do in a big city,” said Elizabeth Kneebone, a Senior Fellow at the Brookings Institution.

“They're trying to evoke a certain kind of place, single family homes, yards, good schools, you know, a really kind of 'Leave it to Beaver' type expectation of what American suburbs are. And that that stereotype is not just outdated. It's also always been too simplistic,” said Kneebone.

But the president says voters are heeding the message.

This week, the Women for Trump bus tour embarked on a journey across New Mexico drawing hundreds.

However, Guy says her group may be evidence of the complexity that is suburban women voters.

“I think he is definitely undervaluing how many minority women are suburban, how many probably, you know, do own guns. Some of us do believe in different religions. And you know, we don't fit in a box,” stated Guy.