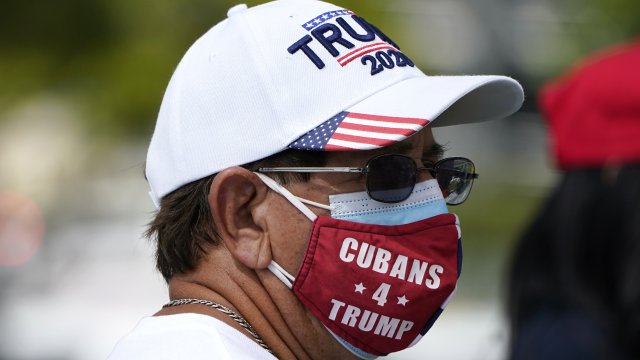 Cuban American Dayami Montejo says she's voting for President Trump because she fears Joe Biden could turn the U.S. into a communist country.

"The United States can end up one day like Cuba. That was the way Fidel started in Cuba, telling young people they're not going to have to pay for school," said Montejo, who came to the U.S. in 1995.

Now a mother and business owner in Miami, she says she trusts President Trump to save the nation from progressive Democrats.

"He's really aggressive. And he says whatever he needs to say in front of anyone. I will go for Trump. Trump 2020," said Montejo.

President Trump appears to be gaining support among Cuban Americans in the Sunshine State.

In 2016, he received about half of their votes. This year, nearly 60% say they will vote for him, according to a recent Florida International University poll.

So, what's behind the gain?

"Whoever is in Washington is kind of drumming the drum and setting the parameters for the narrative," Grenier said, adding that there was a sharp decrease in Republican Party registrations among Cubans during the Obama presidency.

That rhetoric has hit a nerve among exiles in Miami who have been flooded with political ads and misinformation.

"If everybody is saying it, then, you know, it must be true. And that's why they've had enormous success with that message. It gets reinforced at the local level here," said Eduardo Gamarra, a professor of political science at Florida International University.

Pollsters say the dominance of the Republican narrative in Miami helps explain why recent Cuban arrivals are the president's most ardent supporters.

According to the university’s poll, 76% of Cubans who arrived between 2010 and 2015 are registered Republicans.

"What you see is a very active Republican Party, a very theatrical Republican Party. New Cubans coming in find that if they sign up for that, their voice resonates very broadly in the Cuban community," said Grenier.

Cuban Americans are the largest Hispanic voting group in Florida — making up around 6% of the state's total voting population.

But it's unclear whether they could, alone, tip the ultimate swing state to the president.