President Trump Calls For Bipartisanship In State Of The Union 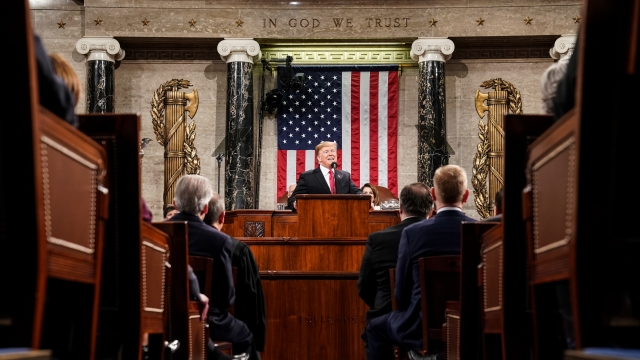 "Madam Speaker, the President of the United States."

After a one-week delay, President Donald Trump delivered the 2019 State of the Union address Tuesday evening.

He started his speech calling for unity and bipartisan legislation, but he also appeared to express his frustration with the ongoing Congressional and special counsel investigations.

"If there is going to be peace and legislation, there cannot be war and investigation. It just doesn't work that way!"

He touched on a number of issues that do have bipartisan support, including lowering health care costs. He also applauded women's achievements in the workforce and in Congress.

"Don't sit yet, you're gonna like this. And exactly one century after the Congress passed the Constitutional amendment giving women the right to vote, we also have more women serving in the Congress than at any time before," Trump said.

On the foreign policy front, President Trump highlighted the renegotiated NAFTA trade deal and called on Congress to approve the new U.S. Mexico Canada Agreement. He also pointed to his diplomatic efforts with North Korea.

"If I had not been elected President of the United States, we would right now, in my opinion, be in a major war with North Korea. Much work remains to be done, but my relationship with Kim Jong-un is a good one," Trump said.

Not surprisingly, a portion of his speech was dedicated to immigration and border security. He called on Congress to pass a budget that includes money for a new physical barrier.

"In the past, most of the people in this room voted for a wall — but the proper wall never got built. I'll get it built. It will be deployed in the areas identified by border agents as having the greatest need , and these agents will tell you, where walls go up, illegal crossings go way, way down," Trump said.

Notably, President Trump didn't mention the recent 35-day government shutdown or the possibility of declaring a national emergency to build a border wall.