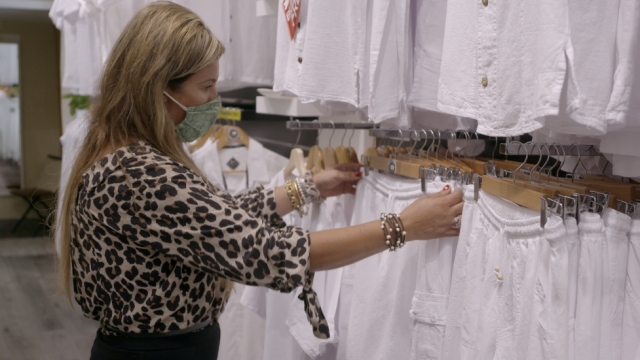 President Trump's path to re-election will almost certainly run through Florida and Hispanic voters like Giovanna Suarez, a Peruvian American and local clothing store owner who says the economy is her top concern.

"In the last election, you didn't vote. But this time around, you said you had a particular candidate in mind and who you're going to support this year."

And why do you want to support the president this year?"

"He[s'] helping the business with [the economy]," Suarez added. "They help us so we can continue in business. You know, there was a really hard month, but with his [support], we're still in business...[we're] open...So that's why we will vote for Trump."

The president has visited Florida twice since returning to the campaign trail following his COVID-19 diagnosis.

"Joe Biden betrayed Hispanic Americans and I'm fighting for you and we're fighting like never before," said President Trump.

It's a message the president's supporters feel is resonating with minority voters who say they're mainly focused on the economy.

"Before COVID he had great success in accomplishments, reducing taxes with the unemployment numbers for Latinos and women and African Americans," said Marili Cancio. "Some of those tax cuts really have helped small businesses like mine and many others in our community."

At least 17 percent of voters in Florida are Hispanic, with the largest groups being of Cuban and Puerto Rican descent.  This year Hispanics will be the largest minority group of voters in the country.

Recent polls show a tight race between President Trump and Joe Biden in the state — with Democrats worried Biden may not receive the same level of support Hillary Clinton did with the key demographic.

"Donald Trump has failed the Hispanic community time and time again and that's not a secret," said Joe Biden.

"It affects elderly people, it affects virtually nobody. It's an amazing thing," the president said.

The Biden campaign has sought to build a diverse coalition of voters in the state through targeted ads on TV and in local papers as well as with grassroots organizing. The message to Latino voters has largely focused on the economic recovery and the president's handling of the pandemic.

"We're a very diverse state and we're a very diverse community," said Florida State Senator Jose Javier Rodriguez. "Latinos from all stripes, all generations, all races. And so one of the things that brings us together is that we all need the economy to recover and we all need a leader that's going to prioritize our health and economic recovery."

The message to Latino voters has largely focused on the economic recovery and the president's handling of the pandemic.

The Trump campaign, meanwhile, has been hammering messages focused on the economy  and accusing Democrats of socialism.

With just days before election day both candidates will likely hit the state hard with messaging aiming to increase their support for November 3rd. Willie James Inman, Newsy, Miami.