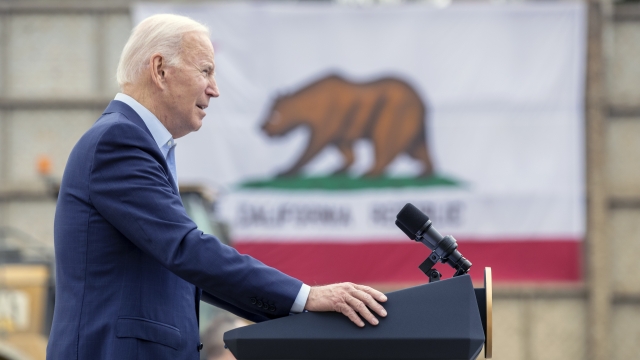 Speaking in Los Angeles, President Joe Biden argued the consumer price index report showed progress but that there is work to be done.

President Joe Biden tried to put a positive spin on a dour inflation report that exceeded forecasts for the month of September.

It was some progress coming off a peak not seen in decades, meaning price increases are still high at more than 8% last month.

The consumer price index climbed near half a percentage point.

"It's not just disappointing; it's actually damaging for households in the sense that their buying power has been robbed by inflation," said Mark Hamrick, senior economic analyst at Bankrate.

The report is a sign the Federal Reserve's multiple interest rate hikes have yet to cool inflation, as the Social Security Administration announces the continued high prices are prompting the biggest cost-of-living increase of Social Security checks in 40 years.

"The major contributors to this rising inflation in the latest reading include many things that we cannot do without," Hamrick said. "This includes food, shelter, a measure basically of rent or what we're paying with our house payments, as well as medical care."

It's particularly stressful for people like Lucille Towns, who is relying more and more on her local senior center.

"I've had to do my shopping here as opposed to going to Kroger or to the other stores," Towns said.

As one of the roughly 70 million people collecting Social Security checks, she's looking forward to the bump, as prices keep climbing.

"I'm looking forward to that," Towns said. "I think that's a blessing."

But some observers worry that increase will mean other costs like rent will go up too, since that's often based on income.

"I think community-based organizations are going to continue to pay a vital role in filling that gap or that need, and I also think that our policy makers need to continue to look at ways in which there can be some enhancements to social security," said Ronald Taylor, lawyer and senior advocate.

Meanwhile in Colorado, farmer James Bennett worries about what's ahead.

"The overhead costs have changed dramatically, yet the rates that we receive when we put our products out really haven't changed," Bennett said.

It's a headache for producers and consumers from the Great Plains to the big cities, as prices keep climbing.