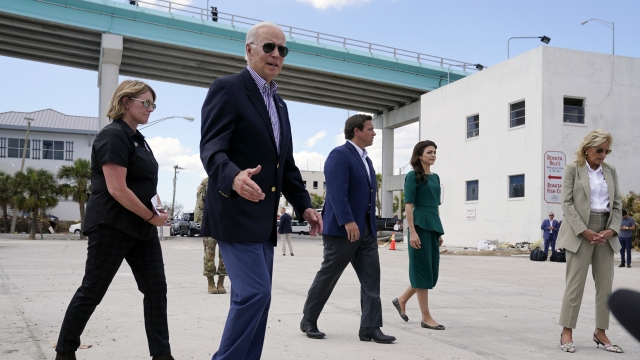 "I want the people of Florida to know you have my commitment, and you have America's commitment," President Biden said. "We're not going to leave."

State and local officials, including Florida Gov. Ron DeSantis, briefed the president on recovery efforts. The political rivals put their differences aside for the matter.

"Today we have one job and only one job: That's to make sure people of Florida get everything they need," President Biden said.

DeSantis praised the Biden administration on Wednesday for its quick response.

"There has been less bureaucracy holding us back on this one than any other," DeSantis said.

Hundreds of thousands of people in the Sunshine State are still without power, and efforts are underway to deliver clean water and food.

At least 110 people have been reported dead due to the storm, including 103 in Florida. Officials warn that the death toll will likely climb as search and rescue efforts continue.

"We've lost a lot people," Florida Republican Sen. Rick Scott said. "A lot of people lost their lives, and there's still a lot of people's loved ones missing. They're still doing search and rescue... and that's what you're worried about. The death toll is gonna go up."

The president plans to meet with residents and business owners in Fort Myers and will thank government officials providing emergency aid.

The White House says more than 3,400 federal workers are on the ground in Florida assisting with storm response operations. The Army Corps of Engineers has deployed over 550 personnel to evaluate infrastructure damage, and the president announced he would double the time the federal government will cover the cost of debris removal from 30 days to 60.

The president and first lady met with local business leaders after seeing the damage first-hand by helicopter and from his motorcade, driving past a marina where community members were handing out hot meals.

In the meantime, he's doing what he can to help his community.

"I like to say in all my businesses and in all my life in every cloud, there's a ray of sunshine, and the sun will come back out here," Goodwin said.