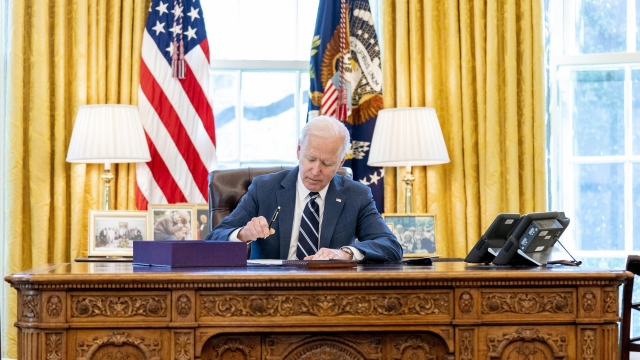 Americans could start seeing a new round of COVID relief payments in their bank accounts this weekend.

President Biden has signed into law a $1.9 trillion package to help the U.S. fend off the impacts of the pandemic.

The law includes $1,400 relief checks to many Americans plus a wide range of other aid. It also temporarily enhances Obamacare and a child tax credit that could significantly reduce childhood poverty.

Despite universal opposition from Republicans in Congress to this bill, polls suggest strong support from the public.

President Biden said: "This historic legislation is about rebuilding the backbone of this country and giving people in this nation – working people, middle class folks, people who built the country – a fighting chance. That's what the essence of it is."

But Republican lawmakers say it's too costly, among other grievances.

House Minority Leader Kevin McCarthy said: "This isn't a relief bill. It's pretty much a payoff for [House Speaker] Pelosi's political allies, and it will be the American people paying the bill."

President Biden signed the bill one year to the day that the World Health Organization declared COVID-19 a pandemic.