Pres. Biden Pledges 'Whatever It Takes' To Assist Tornado Victims 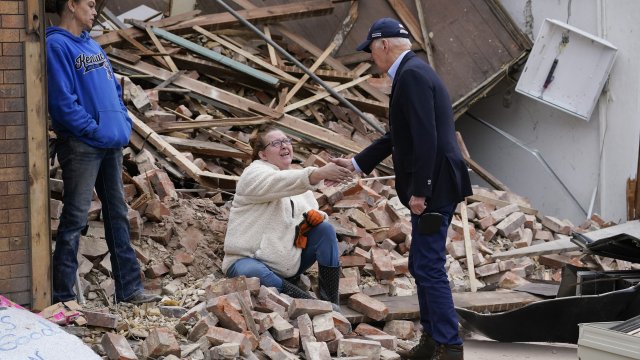 President Joe Biden on Wednesday pledged to do “whatever it takes, as long as it takes” to help Kentucky and other states after a series of deadly tornadoes that he said left a trail of unimaginable devastation. “You will recover and rebuild,” he said.

“The scope and scale of this destruction is almost beyond belief,” he said as he stood before a home reduced to a few walls and piles of rubble in Dawson Springs, one of two Kentucky towns he visited.

Pres. Biden spoke of the stress felt by victims of natural disasters such as the weekend storms that swept across eight states and said it was urgent that people be moved from emergency shelters in order to prevent the spread of COVID-19. At the same time, the president praised the outpouring of support from reeling communities and said the federal support he has committed will keep flowing.

“Something good has to come out of this,” Pres. Biden said. “In so many places, destruction was met with compassion.”

More than 30 tornadoes tore through Kentucky and seven other states over the weekend, killing at least 88 people. Thousands of residents have lost their houses or are without power.

In Dawson Springs, the president walked through mounds of debris. Shattered Christmas decorations were tangled up with shards of furniture and strewn clothing. Trees were uprooted among homes reduced to rubble. Over the sounds of heavy machinery engaged in cleanup just blocks away, the president stopped to speak with storms victims, including a young girl clutching an American flag.

Pres. Biden came over to a family sitting before a home without a roof or windows, and also spoke to a group of police officers. He offered hugs to an older couple.

Earlier, in Mayfield, the president held hands in prayer with Graves County Executive Jesse Perry and a pastor. A family that had gathered in front of a destroyed home talked with Pres. Biden, who told reporters he was “impressed how everybody is working together” on the recovery. On Mayfield’s main street, he spoke with two women in a shattered building. They had a sign that said, “God is good. Beaten but not defeated.”

Pres. Biden also took an aerial tour of the damage and held a briefing with officials in an airport hangar. “I’m here to listen,” he said. This kind of tragedy, Biden said, “either brings people together or it knocks them apart.”

He added: “There’s no red tornadoes and blue tornadoes."

Despite the president's push for unity in the face of disaster, his visit to the strongly Republican county, which Donald Trump won by a nearly 4-to-1 margin in 2020 — brought out some detractors. Scattered protesters offered up “Let's go Brandon” chants, used by some conservatives to represent a more vulgar epithet against the president, as the president arrived.

But Pres. Biden's stop was met with optimism by many residents, who said they hoped the president would help get their communities back on their feet.

“I want to see if he’s going to help individuals who have been affected by this,” said Michelle Anderson, 68, who took cover in her bathtub with her cat when the tornado ripped the roof off the second floor of her apartment building in Mayfield. “I hope he does.”

While congressional business kept him in Washington during the tour, U.S. Senate Minority Leader Mitch McConnell leader has spoken about his appreciation for Pres. Biden's response to the disaster. U.S. House Speaker Nancy Pelosi, D-Calif., said she is talking to Kentucky lawmakers about what’ is needed for the state — a nod to a possible disaster relief bill with supplemental funds for recovery.

Across the United States, it's been a year marked by a notable increase in extreme weather occurrences driven primarily by climate change. Only a month after he was sworn into office, Pres. Biden went to Houston to survey the damage wrought by a historic storm. He was in Idaho, Colorado and California to survey wildfire damage during the summer. After Hurricane Ida struck, the president went to Louisiana as well as New Jersey and New York in September.

The disasters have offered Pres. Biden evidence of what he says is the pressing need for America to do more to combat climate change and prepare for future disasters — a case he made to help push for passage of his spending proposals.

The $1 trillion infrastructure bill, signed into law last month, includes billions for climate resilience projects aimed to better defend people and property from future storms, wildfires and other natural disasters. His proposed $2 trillion social spending package, still pending in Congress, includes billions more to help shift the nation away from oil, gas and coal and toward widespread clean energy and electric vehicle use.

The White House has spent much of the week engaging with lawmakers on the latter. Pres. Biden talked with West Virginia Sen. Joe Manchin, a key Democratic holdout, in hopes of smoothing over some of his issues in time to pass a package before year’s end.

Five tornadoes hit Kentucky, including one with an extraordinarily long path of about 200 miles (322 kilometers), authorities said.

Besides the deaths in Kentucky, the tornadoes also killed at least six people in Illinois, where the Amazon distribution center in Edwardsville was hit; four in Tennessee; two in Arkansas, where a nursing home was destroyed and the governor said workers shielded residents with their own bodies; and two in Missouri.