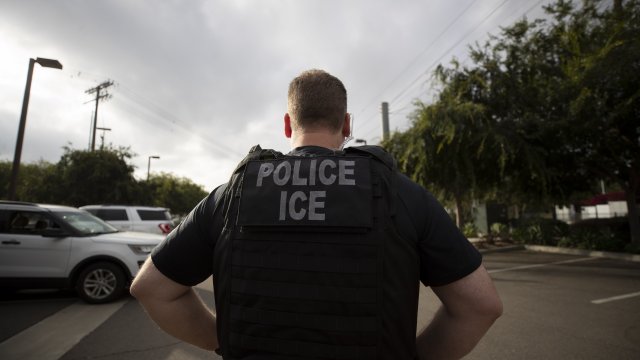 The Biden administration has narrowed ICE arrest priorities and has paused many deportations for 100 days while it conducts an operational review.

The move marks a massive shift in the government's approach to immigration enforcement.

"The fact that my mother will go to work and she will not have to worry about ICE going to her job, you know, like it has happened before," Morelys added.

Morelys moved to the U.S. with her brother on a tourist visa when she was 15 to join her undocumented mother in Maryland — and to stay away from an abusive household in Spain.

She overstayed her visa and has been living in the U.S. illegally for the past three years. She asked us not to use her last name.

"My mom literally had to teach me and my brother the uniform that ICE and CBP wear so that when we see them, we just don't go past them," she said.

In 2019, ICE raided her mom's construction workplace. But her mother happened to be sick.

"I cannot even imagine if she would have gone to work that day," Morelys said.

Under President Biden's new enforcement guidelines, Morelys' family is no longer a priority for arrest and deportation.

New priorities include undocumented immigrants deemed national security threats, those who recently crossed the border illegally and those who have been convicted of an aggravated felony.

As for the 100-day deportation freeze, it applies to all noncitizens with final removal orders except those deemed a security threat and those who recently crossed the border.

The Biden administration says the new priorities will enable it to surge enforcement resources to the border while operating more nimbly in the country's interior.

But Republican leaders and former Trump administration officials say it sends the wrong message to people hoping to enter the country illegally.

"It can't be the message that so long as you don't kill or rape someone, you're here to stay," said Mike Howell, a former Department of Homeland Security official in the Trump administration.