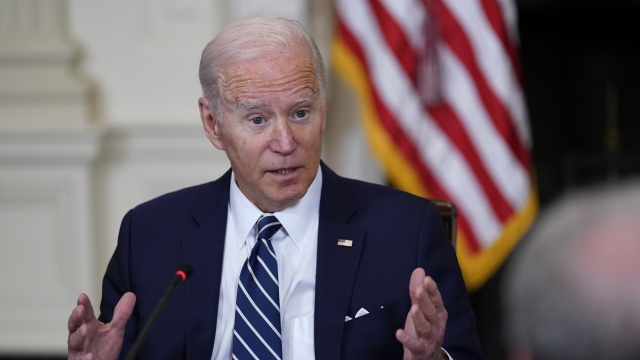 SMS
Pres. Biden, Mexican Pres. Lopez Obrador Focused On Migration In Call
By Adi Guajardo
By Adi Guajardo
April 29, 2022
The two leaders talked as the U.S. prepares to lift the policy that has allowed the U.S. to expel migrants under COVID protocols.

The U.S. and Mexico share 2,000 miles of border and a relationship that has a direct impact on millions of Americans — and U.S. jobs.

It's why the Biden administration is working to rebuild the bilateral relationship with their second largest trading partner.

"We went from being really distant a few years ago, and now we restarted the dialogue," said Diego Marroquin, fellow at the U.S.-Mexico Foundation.

He says the Biden administration needs Mexico to try to get inflation under control and to resume business as usual.

Immigration matters reportedly took up most of the 52-minute call that Lopez Obrador described in a tweet as "cordial."

"The majority of the conversation was about migration and was about continued work on coordination, economic coordination, on taking steps to reduce migration to the border, and they have been a partner in that over the last several months," said Jen Psaki, White House press secretary.

A senior administration official told reporters that President Biden and Lopez Obrador have a shared interest in tackling the root cause of migration.

President Biden's efforts to drop Title 42 — the policy that has allowed the U.S. to expel migrants under COVID protocols — is expected to trigger a rush of immigrants to the border, affecting both countries.

Title 42 is set to expire May 23, but a lawsuit from more than 20 states seeking to keep the policy could extend the that timeline.

Marroquin says this gives Lopez Obrador the upper hand as the U.S. turns to Mexico for help to coordinate a response.

Marroquin says President Biden has been passive on other issues, including in his response to an electricity reform proposed by the Mexican president that violates the U.S.-Mexico-Canada agreement, putting jobs and at least $20 billion in private investments made by the U.S. and Canada at risk.

"We are seeing a president in Mexico that is working against the rule of law, is just violating the spirit of the USMCA," Marroquin said. "So there's some clear progress, but there's some issues that need to be addressed between the two countries."

While experts highlight renewable energy as a top issue, a senior administrative official says they do not have concerns about potential negative impacts from the Mexico proposal.

The Russian invasion is also adding a layer of distrust between the two countries.

Since the war in Ukraine, Mexican leaders have emphasized the country's long-held neutrality on foreign affairs and have continued their relationship with Russian officials.

Mexico's refusal to sanction Russia and send aid to Ukraine has offended the U.S.

On Friday, a senior administration official said they hope Mexico will join the U.S. in imposing a cost to the Kremlin.