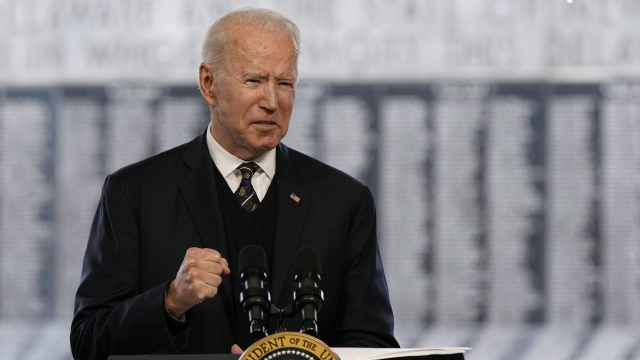 SMS
Pres. Biden Marks First Memorial Day In Office
By Simon Kaufman
By Simon Kaufman
May 31, 2021
President Joe Biden marked his first memorial day as commander in chief by honoring the sacrifice of those who have served at a ceremony in Delaware.
SHOW TRANSCRIPT

President Joe Biden marked his first memorial day as commander in chief by honoring the sacrifice of those who have served at a ceremony in Delaware yesterday.

He also used yesterday's event to preview his meeting with Russian President Vladimir Putin next month.

He said he'll apply the same pressure on Putin that he has on China's president.

"I had a long conversation, for two hours recently, with President Xi, making it clear to him that we could do nothing but speak out for human rights around the world because that's who we are. I'll be meeting with President Putin in a couple of weeks in Geneva, making it clear that we will not — we will not stand by and let him abuse those rights."

The two leaders are set to meet June 16.

The White House says the leaders will discuss a range of topics, with a goal of restoring U.S.—Russia relations.