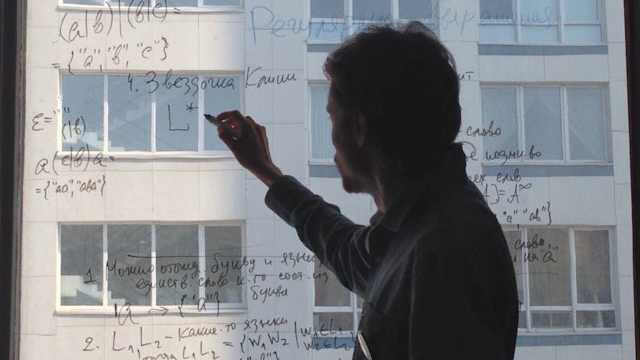 SMS
President Biden Hopes To Draw Scientists Fleeing Russia To The U.S.
By Sasha Ingber
By Sasha Ingber
May 19, 2022
The Biden administration is expediting visas for scientists by eliminating the requirement to have a sponsoring employer.

Ilya Schurov fled Russia on May 3. The police had come to his home, after he posted anti-war messages on Facebook. Now the math professor is teaching his courses with a leading Russian university remotely from Montenegro. And when the academic year ends in June, he'll need another job.

"I just posted that everybody are welcome to go to the streets and protest against this war," Schurov said.

Schurov fled Russia on May 3. The police had come to his home, after he posted anti-war messages on Facebook. Now, the math professor is teaching his courses with a leading Russian university remotely from Montenegro. And when the academic year ends in June, he'll need another job.

Another scientist in Russia tells Newsy that about ten of his colleagues have fled since the war began. He didn't want us to use his name because of security concerns.

"Now our rooms are empty sometimes," the scientist said. "So it is really sad. It is like COVID again. We can't communicate personally with our colleagues."

NEWSY'S SASHA INGBER: Do you want to leave?

SCIENTIST: Maybe I am not so brave. Or maybe because it is not so easy for me to find a job abroad.

They are some of the Russian scientists that the Biden administration is looking to draw to the United States, expediting visas by eliminating the requirement to have a sponsoring employer.

Stanislav Shalunov is a Florida-based AI expert who left Russia in the '90s.

"Right now, it is a historic opportunity to bring the smartest people from Russia to the United States so that they don't benefit Putin's regime and so that they can help the free world," he said.

Shalunov invented a popular encrypted messaging app that worked without the internet. Vladimir Putin's biggest foe, Alexei Navalny, used the app to reach followers when he was jailed.

But Shalunov says not all scientists can leave Putin's Russia, even if they want to, according to state law.

"They wouldn't allow people who have access to secrets to actually leave the country," he said.

The CIA's former Chief of Staff Larry Pfeiffer says another risk lies in the possibility that the vetting process for scientists takes too long.

"If I'm Vladimir Putin and I'm grumbling about how I'm going to lose a lot of my scientists to the West, I'm probably also at the same time looking at as an opportunity to infiltrate some of my own spies into the into the Western companies to steal information and, you know, pass technology back to me," said. "Then they potentially get disgruntled while they're sitting around waiting, doing nothing. You know, that could then become a potential source for the Russian intelligence services to exploit."

And then there is entrepreneur Mikhail Kokorich, who is warning scientists to beware of coming to the U.S.

"Somebody in the government have this feeling that every Russian is just a bad guy," he said.  "This is the reason why I do not recommend for Russian scientists to come to U.S. Because this is a country in the midst of a witch hunt against Russians."

He built a space company in the U.S. to transport satellites, using plasma microwave propulsion. But the Department of Homeland Security revoked a previous approval for a step in his green card application, and then denied it. Newsy reviewed a U.S district judge order in April, which ruled the government’s actions were "arbitrary and capricious." But Kokorich says DHS went even further.

"Why you harass me for these nine years? Why make my life miserable? Why come to my home and tell my wife that, 'Tell he is a spy, otherwise we separate you with our kids'? Why you put me in an immigration prison? I hate it. I hate it. And I will be going on every corner saying that this is a [expletive] country. Don't come if you're an engineer," Kokorich continued.

He funded Russian politicians who opposed Putin and is part of an anti-war committee with prominent Russian opposition figures. But last year, the Defense Department said his space company posed "a risk to national security." Kokorich gave up, moved to Switzerland, and former U.S. Undersecretary of Defense, John Rood, replaced him as CEO.

"I think with my background, I can provide the kind of stability and leadership the company needs going forward to address the USG's concerns, which we're on the path to do now with a national security agreement overseen by the Defense Department," Rood said.

DHS did not respond to Newsy's requests for comment. Meanwhile, Russians in Armenia, Georgia, and Turkey are getting job offers from countries like Canada and Germany, so the U.S. has some competition.