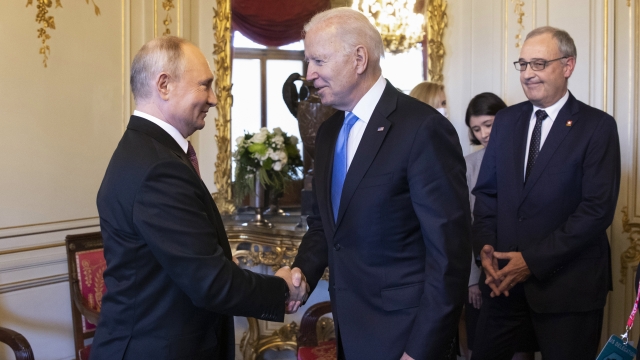 Following President Biden's much anticipated summit with his Russian counterpart, he says the tone of his meeting with Vladimir Putin was good and positive as the two look to lower tensions.

This was their first face to face since President Biden took office.

He said he brought up the imprisonment of American citizens and Russian opposition leader Alexei Navalny.

On whether Nevalny dies in prison, President Biden said he made it clear to Putin that the consequences would be devastating for Russia, without saying exactly how the U.S. would respond.

But President Biden also aims to find areas of cooperation despite their differences.

"Bottom line is I told President Putin that we need to have some basic rules of the road that we can all abide by," he said. "I also said there are areas where there's a mutual interest for us to cooperate for our people – Russian and American people – but also for the benefit of the world and the security of the world."

As for Putin, he praised President Biden as experienced, constructive and balanced, describing their relationship as pragmatic.

The Russian leader also deflected several questions about human rights issues in Russia, pointing instead to tumultuous events in the U.S., including the insurrection at the Capitol and the Black Lives Matter protests.

"People went into U.S. Congress with political demands," he said. "400 people are now facing criminal charges. They are facing prison terms of up to 20, maybe 25 years. They are called homegrown terrorists. They are being accused of many other things. 70 people were arrested right there on the spot. 30 of them are still arrested. On what grounds? Not quite clear."

"I think that's a ridiculous comparison," he said. "It's one thing for literally criminals to break through a cordon, go into the Capitol, kill a police officer and be held unaccountable. And it is for people objecting and marching on the Capitol and saying 'you are not allowing me to speak freely.'"

The U.S. and Russia did agree to work toward international stability and arms controls.

As President Biden heads back home, he hopes to have sent a message.

He said, "I believe, I hope the United States has shown the world that we are back, standing with our allies."