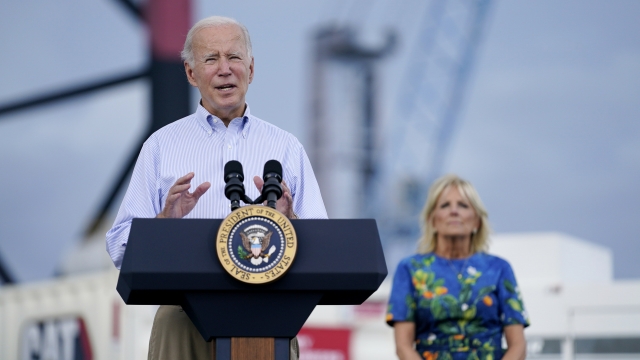 President Joe Biden announced $60 million for infrastructure improvements in Puerto Rico on Monday during a visit to survey devastation from Hurricane Fiona.

"We have to ensure that when the next hurricane strikes, Puerto Rico is ready," President Biden said.

In remarks at the Port of Ponce, President Biden pledged his commitment to getting relief funds to those who need it.

"We're going to make sure you get every single dollar promised," he said.

The president and the first lady also visited with families impacted by the storm, which made landfall on Sept. 18 as a Category 1 hurricane. At least 25 deaths have been linked to the storm so far.

The hurricane knocked out power to the entire island. Ponce was among one of the hardest hit municipalities, and most homes in the area are still without electricity.

Puerto Rico has borne the brunt of a number of powerful storms in recent years. Just over five years ago, Hurricane Maria killed nearly 3,000 people on the island, and many areas are still recovering.

This visit is the first by a president since then-president Donald Trump traveled to the U.S. territory after Hurricane Maria.

"They're trying like hell to catch up from the last hurricane," he said. "I want to see the state of affairs today and make sure we push everything we can."

Both the president and the first lady will be on the road again on Wednesday. They'll be traveling to Florida to view storm damage after Hurricane Ian struck the Sunshine State last week and where rescue operations are still ongoing.