Pregnancy Shaming Is A Real Thing And It's Not OK 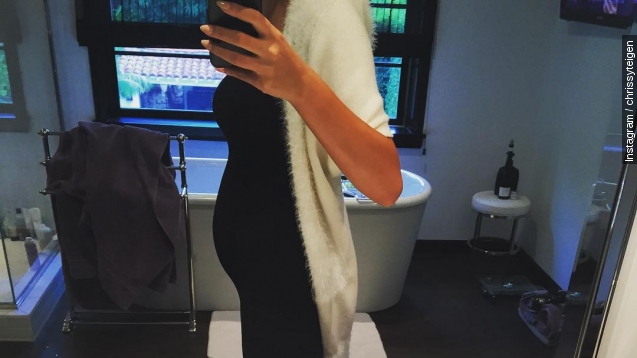 Weight shaming, body shaming, slut shaming ... pregnancy shaming? It's a real thing, you guys, and it's definitely, unequivocally the last thing you want to deal with when you're pregnant.

Being shamed for having a bun in the oven seems absolutely ridiculous. And our newly pregnant spirit animal, Chrissy Teigen, is officially not having any of it.

Negative comments are unfortunately part of living in the limelight, but growing the gift of life is no time to have to deal with haters.

Teigen is one of the few celebs who truly speaks her mind on social media, from joking about her daily pizza intake to advocating for McDonald's to start serving fries earlier. So when she decided to start sharing her prego pics with the world, we were all #blessed.

We got a first look at her baby bump Sunday when she Instagrammed a side shot of her belly with the caption "Somebody is early to the party."

People started tweeting about how she has such a big bump for having just announced. Except no, she is three months pregnant, and those dissenters have officially ruined it for all of us.

After calling out several rude comments, Teigen tweeted, "No more preg tweeting for me, lesson learned! Back to food and reality TV and hay things."

Since when is it OK to hate on pregnant women? It's not just celebs who have to deal with this issue, and pregnancy shaming doesn't just happen when a woman gains a lot of weight.

One Australian news anchor told her critics to "get stuffed" after a tabloid posted shots of her walking around town.

"When you're pregnant you do feel very vulnerable and self-conscious about your body. But then I thought: You know what? Bugger it — I'm growing a baby. I want to say to the haters, 'Get stuffed,'" Sarah Harris said on Studio 10.

On the flipside, model Sarah Stage received massive criticism for being too fit during her pregnancy.

She told Entertainment Tonight, "I'm just trying to stay positive. It's hard enough to be pregnant."

You can say that again. And, to all those pregnancy shamers out there — how do you think you got here?