Nuclear-Level Asteroids Might Be More Common Than We Realize 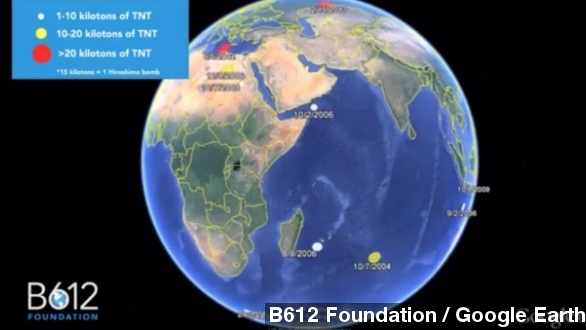 SMS
Nuclear-Level Asteroids Might Be More Common Than We Realize

By Christine Slusser
April 23, 2014
The B612 Foundation says asteroids strike Earth much more often than previously thought, and are hoping to build an early warning system.
SHOW TRANSCRIPT

Okay, everybody can probably panic. Space rocks big enough to do some serious damage to Mother Earth strike much more often than previously thought.

"Between 2000 and 2013, 16 massive explosions over the earth, many over the oceans. And astronomers calculate an asteroid big enough to destroy a city hits the earth roughly every 100 years."

Space experts and former astronauts have now warned it could only be a matter of time before one of the massive rocks hits land, and the fact we've made it this long has been blind luck.

Yeah, anyone remember the story of the dinosaurs? An asteroid the size of San Francisco is believed to have entered our atmosphere and finished them off 65 million years ago. (Via Discovery)

"In 2018, the B612 foundation plans to launch an infrared space telescope to detect potentially deadly asteroids ... The group says it believes if a threat is discovered, the world will unite to find a way to deflect it." (Via WNEM)

But maybe not all hope is lost for us earthlings. The B612 Foundation is a group of astronauts and scientists united, sort of like superheroes, to protect Earth and research asteroid impacts.

"An early warning infrared space telescope for tracking asteroids would give us many years to deflect an asteroid when it's still millions of miles away. The next great space mission is protecting the planet."

USA Today reports a decent-size city could be reduced to ruins by a big enough space rock. Before this once-every-hundred-years estimate, asteroid strike rates were believed to hit once every 3,000 years.

Scientists in the B612 Foundation counter once outside scientists come to agree it's plausible, that number could be too large. Regardless ... ASTEROIDS, PEOPLE!