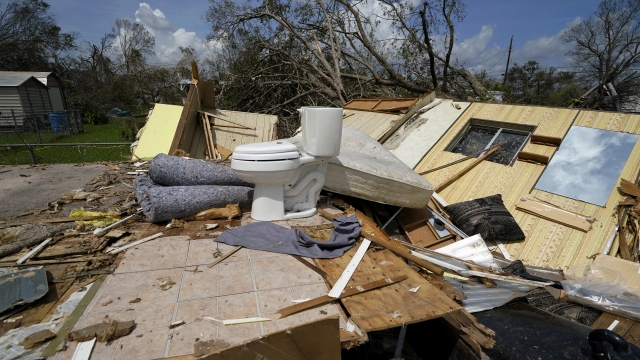 SMS
Power Outages From Laura Could Last Weeks
By Nathan Byrne
By Nathan Byrne
August 31, 2020
People living along the Louisiana coastline were hit hardest. They could be without water and power for weeks.
SHOW TRANSCRIPT

Many people in Louisiana and Texas woke up Monday still without power following the devastation brought by Hurricane Laura.

People living along the Louisiana coastline were hit hardest. They could be without water and power for weeks.

The outages come as heat advisories are declared, with temperatures forecast for the mid-90s and high humidity in Louisiana. But some families are trying their best to keep things normal.

"We ain't got no power, so we're cooking on the porch," said Phillip Vincent, a Louisiana man whose home was hit by Laura. "Kids are having fun in a little bit of rain, the dog's outside. Trying to make the best of it."

Eighteen deaths in Texas and Louisiana have been attributed to the storm. More than half of those are blamed on carbon monoxide poisoning from the unsafe operation of generators.

The rebuilding process could take several months if not longer. More than 50,000 people have already applied for FEMA assistance.