2 People Are Claiming To Be The President Of Honduras 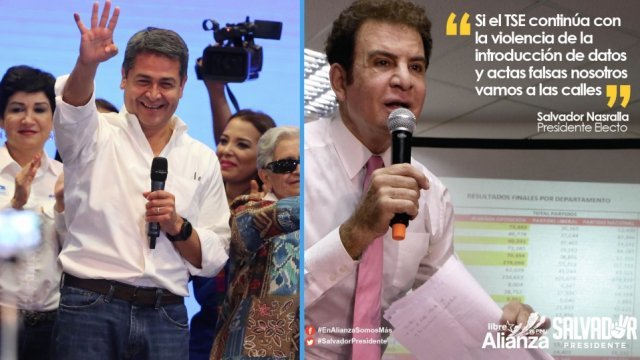 SMS
2 People Are Claiming To Be The President Of Honduras
By Gabrielle Ware
By Gabrielle Ware
November 30, 2017
The opposition candidate says he won't accept an outcome where he isn't declared the winner.
SHOW TRANSCRIPT

Four days after Honduras' presidential election, both sides are claiming victory — prompting protests in the country and international concern.

Incumbent President Juan Orlando Hernández showed a slight lead Thursday with over 90 percent of the votes counted, according to an Al Jazeera report.

Opposition candidate and TV star Salvador Nasralla prompted thousands of his supporters to take to the streets by saying, "We've already won." It's unclear who the electoral tribunal will actually declare as the winner.

Nasralla says he won't accept any outcome where he isn't declared the winner. Refusing to accept a loss may sound like sour grapes, but his supporters say they have reason to be distrustful of the results.

First, the electoral tribunal is appointed by Congress, which is controlled by Hernández's National Party. Second, Nasralla had a lead over Hernández in preliminary results with over half of the votes counted.

Also, among other things, there's concern about how slowly the votes are being counted. The BBC reports at one point the count came to a 36-hour halt. Officials are being accused of fraud.

Hernández's party has also faced accusations of corruption and drug trafficking in the past, which doesn't exactly help its credibility. A member of the Opposition Alliance told Al Jazeera, "That's why we don't trust it and we're going to be alert for what they decide today, tomorrow, or any day."

Final election results are expected to come out soon.