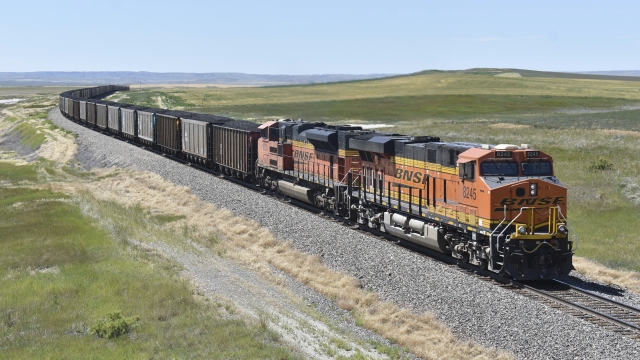 SMS
Possible Railroad Worker Strike Could Upend U.S. Supply Chain
By James Packard
By James Packard
September 13, 2022
There are 60,000 workers in two unions still demanding pay and time off concessions from rail lines, with no deal on the table yet.

As trains barrel across rail lines coast to coast, a labor dispute is barreling toward an end-of-week deadline that could derail the country's shipping industry and upend commerce in a multi-billion-dollar strike.

Rail lines and the country's two largest rail unions still can't agree on pay and time off, leaving some 60,000 workers ready to leave the job Friday unless they get a deal.

"The companies have very demanding schedules," said Andy Borchers, business professor at Lipscomb University. "There will be a variety of products that'll be affected, and we may not even know for sure exactly which ones those are until the breakdown happens."

At the White House Tuesday, Press Secretary Karine Jean-Pierre said the Biden administration is working on contingency plans to keep moving whatever goods they can, but still pushing aggressively to avoid a strike altogether.

"A shutdown is not acceptable," Jean-Pierre said. "That is not something that we want. It risks harming families, farming, harming businesses and whole communities. We have made that clear, empathetically and repeatedly to both parties."

The Association of American Railroads, a trade group that represents the major freight lines, says a strike could cost the country more than $2 billion a day.

The unions say BNSF and Union Pacific's attendance policies make it difficult for workers to take time off, especially for medical appointments. The rail lines reject that argument.

The threat of strike comes as the U.S. supply chain grapples for ways to address the effects of the pandemic.

"These improvements are expected to reduce trucking delays by almost 2,500 truck hours every single day," Buttigieg said. "It's going to allow freight trains to move goods more rapidly, and yes, that's part of the fight against inflation because it can help reduce shipping costs and the cost of goods."

But port leaders have said for months a shortage of rail workers has made getting containers off their terminals difficult.

The fight is part of a larger, global trend as rail workers in the U.K. forced a strike late last month, likely to resume after Queen Elizabeth's state funeral.

"Before we even get onto pay, we have to sort out job security, which we haven't done," said Mick Lynch, secretary-general of the Rail, Maritime and Transport Union.

Airlines, trucking lines and major corporations from retail to commerce are now used to a new era of workers demanding higher pay and better working conditions, plus the workers are ready to unionize and strike if they don't get what they want.