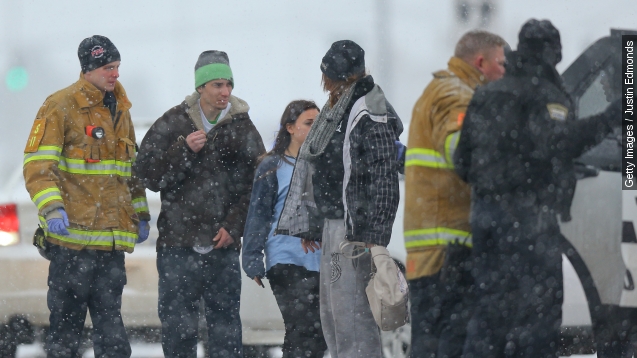 That could be a reference to an anti-abortion group's controversial and highly edited videos claiming Planned Parenthood sells baby parts after an abortion. The videos, released earlier this year, led to a House hearing about Planned Parenthood's government funding. (Video via The Washington Post)

Officials have carefully noted that Dear's remarks were just a few he made to investigators and stressed that it's too early to say if the attack was politically motivated. Despite the lack of a confirmed motive, some are suggesting anti-abortion sentiment is a possible reason for the attack.

Vicki Cowart, president and CEO of Planned Parenthood of the Rocky Mountains, said in a statement Saturday, that there's been an increase in hateful rhetoric against Planned Parenthood and said eyewitness accounts confirm the shooting "was motivated by opposition to safe and legal abortion."

Colorado Springs Mayor John Suthers told The Wall Street Journal, "Obviously, people are going to infer, and probably not illogically, that the location had something to do with his motivation, and that may well turn out to be the reality."

Since the late '70s, there have been hundreds of crimes against abortion clinics, mainly vandalism and arson, according to the National Abortion Federation. Since June this year, four Planned Parenthood locations were set on fire. (Video via KXLY)

After these recent arsons, one pro-abortion rights group released a petition to have the Department of Justice consider attacks on clinics as an act of "domestic terrorism." The group updated the petition to include information about the Colorado Springs shooting and had over 52,000 signatures as of Sunday.