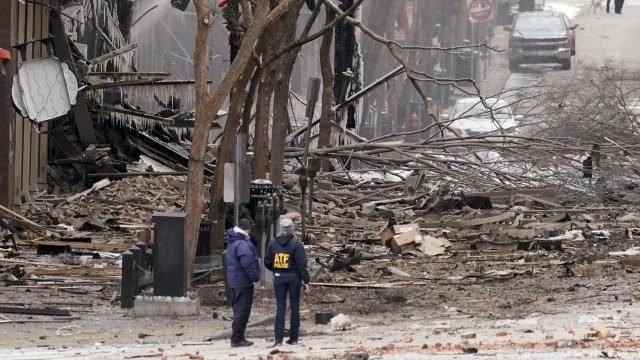 SMS
Possible Human Remains Found At Nashville Explosion Site
By Bailey Vogt
By Bailey Vogt
December 26, 2020
Nashville's Police Chief said tissue found near the site of the explosion will be tested to determine if it is human remains.
SHOW TRANSCRIPT

Potential human remains have been found at the site of a Christmas morning explosion in Nashville, Tennessee.

Nashville's Police Chief said Friday evening that tissue was discovered near the site of the massive blast that caused major damage to the downtown business district. Police say the bombing was intentional. Now they are testing the tissue to see if it's human remains.

Authorities declined to speculate on whether the tissue could have been connected to a person who may have been inside a recreational vehicle that exploded.

It's an added piece to a puzzling crime — which rocked Nashville on Christmas morning and hospitalized three civilians. No deaths have been reported.

When they arrived at the scene, they encountered the RV, which is pictured here, according to police. The RV blared a warning that a bomb was going to detonate in 15 minutes.

CNN reported the blast damaged at least 40 buildings and a network hub for AT&T — which has resulted in widespread outages across the region.

Police aren't allowing anyone into the area until Sunday to ensure the structural integrity of affected buildings can be assessed.

No credible threats were reported prior to the explosion.