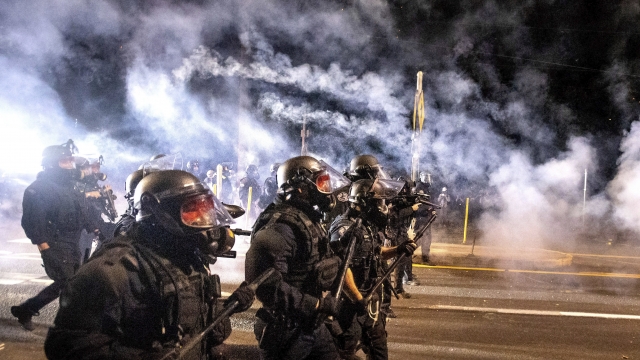 SMS
Portland Hits 100 Days Of Protests — With No Slowdown in Sight
By Bailey Vogt
By Bailey Vogt
September 6, 2020
Police declared the protest a riot after demonstrators threw Molotov cocktails at police and started a fire.
SHOW TRANSCRIPT

The city of Portland, Oregon marked its 100th day of protests Saturday — with the milestone night leading to a demonstration being declared a riot.

Police said protesters trying to march to a police precinct threw Molotov cocktails at officers and started a fire. Authorities used tear gas on what they called "tumultuous and violent conduct." The Portland Oregonian reported more than 50 people were arrested. Police said one community member was injured.

Protests began in late May after the death of George Floyd in Minneapolis police custody — igniting racial justice protests across the U.S.

Since then, Portland has become one of the main stages for demonstrations against police and racial injustice. Meanwhile, the city's mayor has tangled with President Trump over sending federal agents to try to restore order. And a member of the conservative group Patriot Prayer was shot and killed late last month. On Saturday, hundreds of people, some wearing MAGA hats, gathered in nearby Vancouver, Washington for a memorial service for the man.

Protesters say they think the unrest will continue until the 2020 general election, with one telling the Associated Press, “I don’t see it slowing down.”