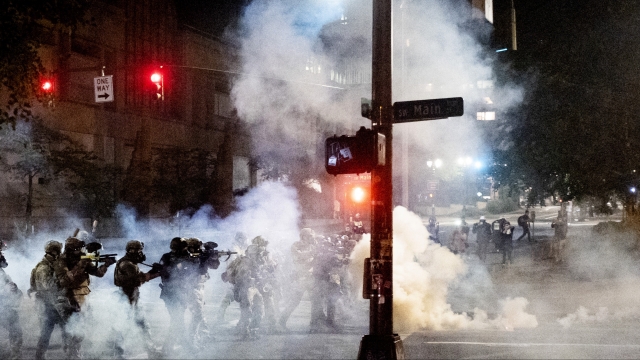 This scene on Monday night, with helmeted federal agents in battle fatigues, with exploding noises and vapor clouds, is the extraordinary new normal in an American city.

For more than 50 nights, Portland, Oregon, has been the scene of intense protests over racism and police brutality that have also brought graffiti, fires and destruction.

And now the Trump administration's injection of unidentified federal law enforcement officers into the mix is further exacerbating tensions, though the president has tweeted "We're trying to help Portland, not hurt it."

The crackdown, a federal police show of force the city didn't invite, isn't curbing the protests. In fact, they're surging — with federal agents as the new target.

Earlier Monday, this was the turnout of demonstrators, now demanding that federal law enforcement leave the city.

It was this viral video, uploaded to Twitter on July 15, that has inflamed searing political debate over federal tactics in the city. It shows a protester, Mark Pettibone, detained without explanation by unidentified officers, who then spirited him away.

Pettibone was loaded into an unmarked rented minivan and taken into federal custody. He was later released without charges. But Portland's mayor expressed horror.

"The videos, the pictures, the experiences that we are all witnessing here in Portland should be shocking to all. The words and actions from President Trump and the Department of Homeland Security have shown that this is an attack on our democracy."

President Trump is standing by the Oregon tactics. He declared on Twitter the city "leadership has...lost control of the anarchists and agitators."

The Portland police union is now calling for demonstrators to the vacate the streets, after vandals defaced its office and set a fire inside last weekend. Union president Daryl Turner says the protests are no longer about justice.

Meanwhile, Oregon Sen. Jeff Merkley posted the video of Pettibone's detention, depicting it as an "authoritarian" act that is "absolutely unacceptable in America."

And protesters are now regularly on the march to the Portland federal courthouse, with no intention of standing down.