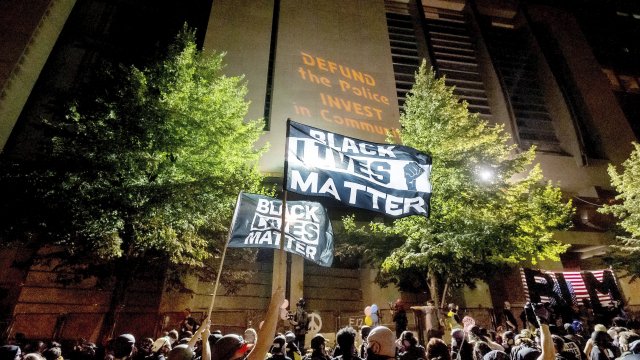 SMS
Portland Police Declare Another Riot Outside Law Enforcement Building
By Alex Arger
By Alex Arger
August 23, 2020
Portland police have declared at least 18 riots since protests began in the city in late May. There have also been at least 500 arrests.
SHOW TRANSCRIPT

Portland, Oregon police declared this scene a riot late Saturday night after trying to force protesters away from a government building.

A group of 250 people who tried to march on building were stopped in a standoff with police and then retreated. The situation escalated to a riot after they later returned and threw rocks and bottles and shot paint balls at officers.

Fourteen people were arrested, including one for assault on a public safety officer. Officials said policing yet another night of disturbances in Portland made them unable to immediately respond to calls of shots fired, assaults and threats elsewhere in the city.

Police declared a riot outside of the same public safety building a week ago after a similar scuffle between protesters and police.

Saturday began with hours of rivaling protests between right and left-wing demonstrators that included fistfights and pepper spray as police watched from a distance.

Protests in Portland have been ongoing for more than 80 days. In July, President Donald Trump deployed federal troops to quell violence, but they were removed after some said the soldiers' presence was escalating the situation. Since protests began May 29, police have declared a riot at least 18 times and have arrested around 500 people.