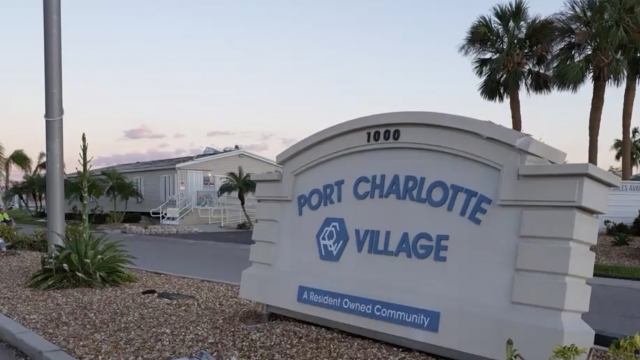 Days after Hurricane Ian swept across Florida as a category 4 storm, Port Charlotte residents are recounting the storm, cleaning up and counting their blessings.

"Getting gas for generator — that had to be the scariest thing in the world," resident Herman Gardner said.

"People are going through a lot, and they just have to keep the faith," said Al Mullen, who lives in a flooded community.

They have also switched to survival mode, as most parts of the area are without the basics: power, water and — for some — shelter.

Mullen anxiously drove home to see his house after the storm hit the area.

"I seen the first house that is tore almost in half and the first half was gone, and I think I felt my chin hit my ankles and my heart, of course, was below that because I didn't expect much," Mullen said.

Unexpectedly, his house and a few of his close neighbors' homes were still standing. It gave him the boost he needed to start helping others.

"It's the people in here that matter," Mullen said. "If you're still living, you can make whatever you need, help those in need, and that's how I felt."

A family fishing business in Fort Myers lost almost everything after Hurricane Ian devastated the area.

Nearby in another section of town, Hurricane Ian caused more damage. One family recently put a brand new roof on their home, and now 20 feet of it is missing. A neighbor's missing boat was found in their backyard.

Since the power is out, many are driving hours to grab gas. One Port Charlotte couple drove to Tampa and also got gas for several neighbors.

Pulling up to the pump can be costly and time consuming, with one man waiting four hours to reach the pump.

Hundreds of thousands are still without power. The water is out, too.

"I just wish the infrastructure could hold up a little better," said Bonnie Schade, while getting gas for her generator. "The traffic lights, the power lines — I wish we had a better water system, but it's getting fixed again."

Still, residents remain hopeful their community will push through the hardship.

"The spirits will lift and so will the hazards, and we'll be here dragging aluminum until we're back to the beautiful community we started off at," Mullen said.