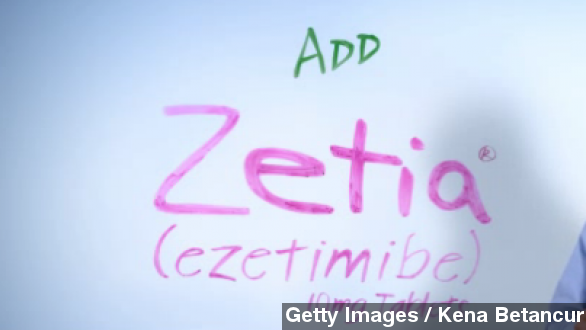 A cholesterol-lowering drug that's been given to patients for more than a decade has just now been proven effective in a study presented by the American Heart Association. So what's the story here?

The drug in question is Zetia, a cholesterol absorption inhibitor. It was approved for use by the U.S. Food and Drug Administration in 2002 but fell under controversy six years later.

That's because in 2008, Zetia's makers Merck and Schering-Plough saw their stock prices fall as they announced that in clinical trials, Zetia did not reduce fatty plaque in subjects' arteries like it was supposed to. (Video via MedPage Today)

KATIE COURIC FOR CBS: "In fact, it actually increased the amount of plaque, did it not?"

DR. STEVEN NISSEN: "Well, the differences were not statistically significant, but the trend was going in the wrong direction."

Though Zetia, generic ezetimibe, and Vytorin, a Zetia-statin combination drug, have still been prescribed to patients since that report, sales of the multibillion-dollar franchise have fallen since 2008.

"The drug did lower the risk of heart attack and stroke in patients already on aggressive therapy. This in a study that lasted almost a decade." (Video via Nightly Business Report)

Those already in "aggressive therapy" are what researchers call "high risk," which were the only patients to see significant benefits from using Zetia. They had to have a previous heart attack or unstable angina to qualify for the study.

But the benefit for those high-risk patients was notable. When Zetia was combined with a statin, cardiac events like heart attack and stroke dropped 6.4 percent, according to The New York Times.

The Centers for Disease Control and Prevention reports that, on average, 1 in every 4 deaths in America each year is due to cardiac events and heart disease.