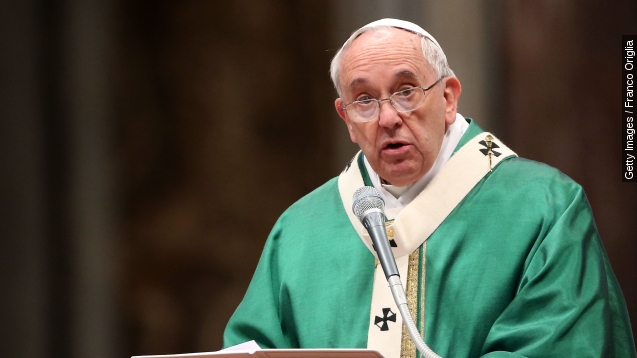 Pope Francis’ first encyclical is out — so what does it say? (Video via Vatican Television Center)

Pope Francis has released his first encyclical, as was expected, the pontiff is taking a hard stance on fighting climate change.

The 184-page letter, released Thursday, seals the Pope’s position on a number of issues. In it, he calls for solutions to such problems as fresh drinking water shortages, deforestation, pollution, climate change and global inequality.

In one section, he writes “Climate change is a global problem with grave implications: environmental, social, economic, political and for the distribution for goods. It represents one of the principal challenges facing humanity in our day.”

The encyclical offers an uncommon intersection between science and religion, and comes ahead of highly anticipated climate talks set to resume later this year in Paris. (Video via Deutsche Welle)

Speaking to The New York Times, a Catholic theology and culture chair at the University of Dayton said encouraging environmental concern is less about the church teaching policy and more about what lies at the core of the church’s teaching. (Video via GoPro)

A reverend who heads the German-speaking section of Vatican Radio told The Guardian, “Yes, we talk about justice and poverty. And now we also talk about ecology. There is now an added element to the official teaching of the church, and it is not something Francis has made up. It is in the Bible.” (Video via Vatican Television Center)

And while scientists may be satisfied knowing a global figure such as the Pope is reinforcing the danger of climate change, others have been less than pleased.

While answering an audience member’s question about the Pope’s encyclical at a campaign rally event Tuesday, Jeb Bush said he doesn’t get his economic policies from his pope.

The Pope did work in a defense against abortion in his encyclical though, giving weight to some of the church’s more conservative beliefs.