Pope Says Catholics Don't Have To Mate 'Like Rabbits' 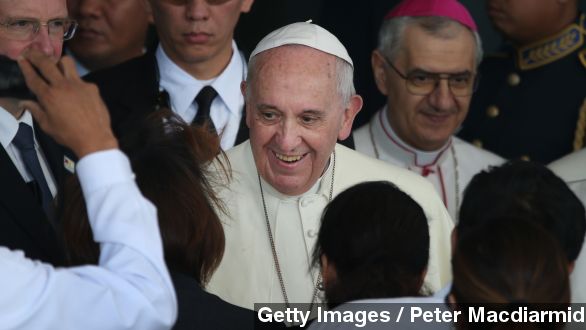 SMS
Pope Says Catholics Don't Have To Mate 'Like Rabbits'
By Jamal Andress
By Jamal Andress
January 20, 2015
Although the Pope asked Catholics to practice responsible parenthood, he also held firm on the Catholic prohibition of contraceptives.
SHOW TRANSCRIPT

The always outspoken Pope Francis has some advice for all the potential Catholic parents out there.

"Some think that, excuse me if I use this word, that in order to be good Catholics we have to be like rabbits. No."

The pontiff made these comments on the plane ride home from the Philippines. Nearly 6 million people attended his mass in the capital city of Manilla Sunday. (Video via Vatican)

While he asks Catholics to practice responsible parenthood, he also held firm on the Catholic prohibition of contraceptives, urging couples to opt for "licit" ways to control parenthood. (Video via Rappler)

While on the subject of contraceptives, the pontiff also made a larger point about what he calls "ideological colonization" – in this case, when Western aid is given to countries in the developing world with certain conditions. (Video via CCTV)

According to the National Catholic Reporter, an African archbishop complained about as much back in October during a meeting of the Catholic clergy:

"We get international organizations, countries and groups which like to entice us to deviate from our cultural practices. …Now you come to tell us about reproductive rights, and you give us condoms and artificial contraceptives. Those are not the things we want." (Video via YouTube / Salt and Light)

Pope Francis referenced the African Archbishop’s comments when he spoke about the supposed "ideological colonization" saying, "It colonizes the people with an idea that changes, or wants to change, a mentality or a structure."

The Pope is scheduled to visit the United States for the first time as pontiff in September with plans to stop in Philadelphia, Washington D.C. and New York.