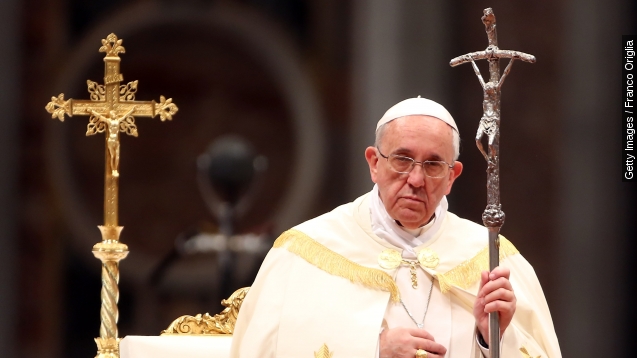 Pope Francis has turned heads again with another controversial view. On Wednesday, in front of his weekly general audience, he said that sometimes divorce is "inevitable."

He also said, "Sometimes it can become even morally necessary, precisely when it comes to subtracting the weaker spouse, or small children, from more serious wounds caused by intimidation and violence, humiliation and exploitation.”

As of now, the Catholic Church doesn't officially accept divorces, though it does allow church-sanctioned annulments. But getting one is often a lengthy and complicated process.

And The Wall Street Journal reported in December Francis said the church must find ways to be more welcoming of divorcées, as well as homosexuals. These comments, perhaps unsurprisingly, caused a split within church leadership.

One divisive issue is whether divorced followers should be able to receive communion, which, under the idea of transubstantiation, Catholics believe is the literal body and blood of Christ. Communion is considered one of the Catholic Church's most important sacrements.

Still, there is cautious early support for the pope's latest message. An associate professor of moral theology told the New York Post it "may give women trapped in violent relationships the strength to put their safety ahead of doctrine."

Francis' comments are expected to set the stage for debates at the upcoming October Synod about if and how the church should adjust doctrine for changing family dynamics.